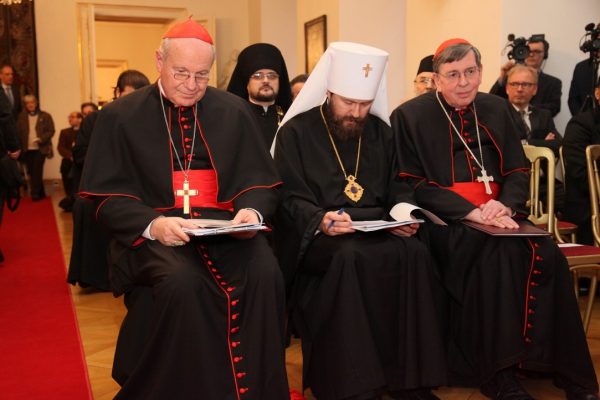 On February 12, 2018, the second anniversary of the Havana meeting between Patriarch Kirill of Moscow and All Russia and Pope Francis of Rome, an international conference devoted to the situation of Christians in the Middle East took place in Vienna. Organized with the participation of the Catholic diocese of Austria, the forum took place at the Episcopal Palace of Vienna. Its co-organizers included the Moscow Patriarchate Department for External Church Relations (DECR), the Pontifical Council for Promoting Christians Unity, the Russian Federation Ministry of Culture and the Russian embassy in Austria.

The conference was opened with the address of Archbishop Christoph Schoenborn of Vienna. He spoke about the importance of the Havana meeting, pointing out that this historic event was in itself a message to all Christians and people of good will.

Then the participants in the forum were greeted by Ambassador Lyublinsky. He noted the importance of holding such a forum in Vienna as a traditional center for dialogue between states, cultures and religions.

After that, Metropolitan Hilarion made a report about the situation of persecuted Christians, the realization of practical Orthodox-Catholic cooperation in this area and the work of the Russian Orthodox Church to give support to the suffering brothers and sisters. He presented a catalogue of the ruined Christian churches prepared through the common efforts of the Moscow Patriarchate department for external church relations and the Catholic organization ‘Kirche in Not’. The brochure contains data on 30 establishments. He also spoke about the largest humanitarian action to be held in Syria. It was carried out by the Interreligious Working Group functioning under the aegis of the Russian Presidential Council for Cooperation with Religious Associations.

Cardinal Kurt Koch introduced the forum to the humanitarian work carried out by the Roman Catholic Church in the Middle East, especially in Syria and Iraq. He devoted a considerable part of his address to a reflection on the phenomenon of Christian martyrdom.

Speaking next were hierarchs from Christian Churches in Syria. Bishop Armash Nalbandian of Damascus spoke about the situation of Christian in Syria where churches are being destroyed, clergy and laity kidnapped, Christians leaving their homelands for seven years now. According to his information, 60% of the local Christians have lost their homes; in Syria’s Armenian community alone over 200 people were killed, 450 wounded, 120 kidnapped, thousands of churches destroyed, 70 churches ruined, over 59 Christian facilities damaged. He called upon Christian Churches to help preserve the Christian presence in the Middle East, also through prayer. He expressed gratitude for the solidarity manifested by the Orthodox and Catholic Christians. The bishop also spoke about the recent bombardment of Christian residential areas in Damascus in which civilians including children were killed. After that all the schools had to be closed.

The speaker expressed special gratitude to the Russian Orthodox Church for the February visit of the interreligious humanitarian delegation, noting that for Syrian Christians this action became an important sign of solidarity.

Maronite Bishop Zahle Joseph Mouawad spoke about the difficult social and humanitarian situation in Lebanon, in which there are 3 million refugees from Syria. He also expressed gratitude to the Russian Orthodox Church for the humanitarian action carried by the Interreligious Working Group in the Beqaa Valley. He underscored the importance of political and religious dialogue for stabilization of the situation in Lebanon.

After the conference, a reception was given on behalf of the Catholic Archdiocese in Vienna, during which participants continued discussing the reports.