Moscow Representation of the OCA Celebrates Commemoration Day of St. Herman of Alaska 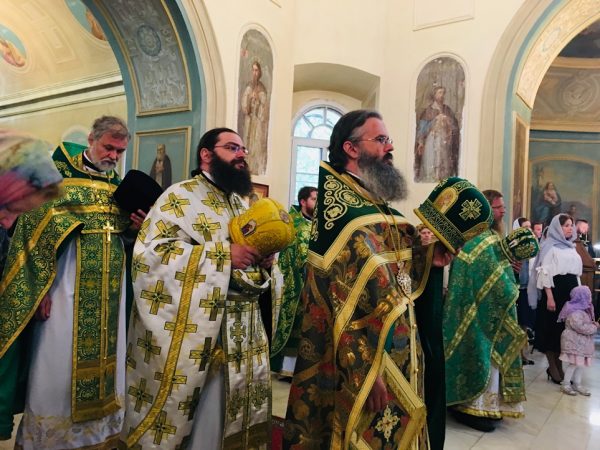 On 9 August 2019, commemoration day of St. Herman of Alaska was celebrated at St. Catherine the Great Martyr Church in-the-Fields, the Representation of the Orthodox Church in America to Moscow Patriarchate. Archbishop Michael of New York and New Jersey, OCA, and Bishop Dionisy of Voskresensk, first Patriarchal vicar for Moscow, ROC, officiated.

Concelebrating at the Divine Liturgy were Archpriest Daniel Andrejuk, rector of church and representative of the OCA to the Patriarch of Moscow and All Russia; Archimandrite Seraphim (Shemyatovsky), representative of the Orthodox Church of the Czech Lands and Slovakia to the Patriarch of Moscow and All Russia; Archpriest Kakhaber Gogotishvili, Georgian Orthodox Church, a cleric of the Church of St. George the Victorious in Moscow; Hegumen Iosif Kryukov, head of the representation of the Valaam Monastery in Moscow, Archpriest Valery Bulannikov, rector of the Church of St. Nicholas in Moscow; Rev. Pavel Zuyev and Ioann Ignatov; deacons Timofei Schipachev, Dimitry Asratyan and Rustik Kartashev.

After the Liturgy, a prayer service to St. Herman of Alaska was celebrated and Many Years were proclaimed to the Primates of the Russian Orthodox Church and the Orthodox Church in America.

Archpriest Daniel addressed words of greeting to Archbishop Michael, Bishop Dionisy, representatives of the Local Orthodox Churches, clerics, parishioners and guests. He expressed special gratitude to the archpastors for concelebration and asked them to convey his gratitude to Patriarch Kirill of Moscow and All Russia and Metropolitan Tikhon of All America and Canada for their unswerving attention and fatherly care for the Church of St. Catherine the Great Martyr.

Fr. Daniel expressed his joy over the celebration attended by representatives of the Local Orthodox Churches and his hope that the Lord will keep the unity of world Orthodox through the prayers of St. Herman.

Bishop Dionisy welcomed all those gathered on behalf of His Holiness Patriarch Kirill of Moscow and All Russia.

Archbishop Michael said that it was a great joy for him to celebrate the Liturgy on the commemoration day of St. Herman in Russia, the birthplace of the saint, and added that next year the Russian Orthodox Church and the Orthodox Church in America will celebrate the jubilee of his glorification. As the rector of St. Tikhon’s Theological Seminary in Pennsylvania, Archbishop Michael expressed his joy over concelebration with his former students Daniel, Iosif and Valery. He concluded his address, saying that the Sacrament of the Eucharist unites Moscow with Kodiak and Russia with America by the grace of Our Lord Jesus Christ.