His Music, Entwined With His Faith: Composer Arvo Part

Source: The New Yourk Times
Questioned about his main influences, Mr. Pärt responded: “Of course, Christ. Because he solved his fraction perfectly, godly".
William Robin | 20 May 2014 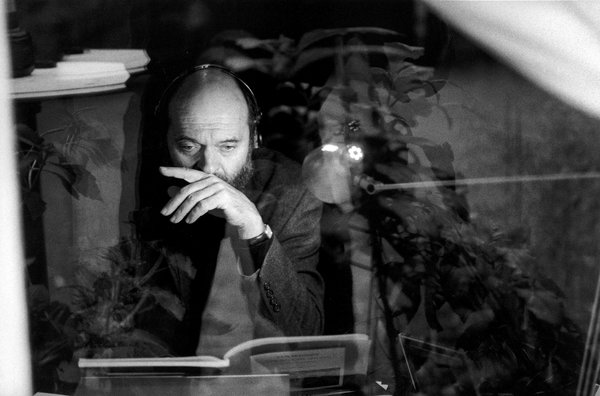 “Religion guides all the processes in our lives, without us even knowing it,” the Estonian composer Arvo Pärt said in a recent phone interview. “It is true that religion has a very important role in my composition, but how it really works, I am not able to describe.”

Mr. Pärt, 78, is a practicing Eastern Orthodox Christian, which is frequently mentioned but often left unexplored. Critics and fans compare his contemplative, austere music to the painted icons central to Eastern Orthodoxy, but rarely delve into those connections in great detail.

Filling in these gaps is one of the goals of the Arvo Pärt Project, which will bring the composer to New York for the first time in 30 years for a series of performances in New York and Washington. The New York events include an all-Pärt program at Carnegie Hall on May 31, featuring the Estonian Philharmonic Chamber Choir and the Tallinn Chamber Orchestra; on June 2, his choral cycle “Kanon Pokajanen” will be staged in the Metropolitan Museum of Art’s Temple of Dendur. The project — which will also include panel events and academic collaborations — is sponsored by St. Vladimir’s Orthodox Theological Seminary in Yonkers. 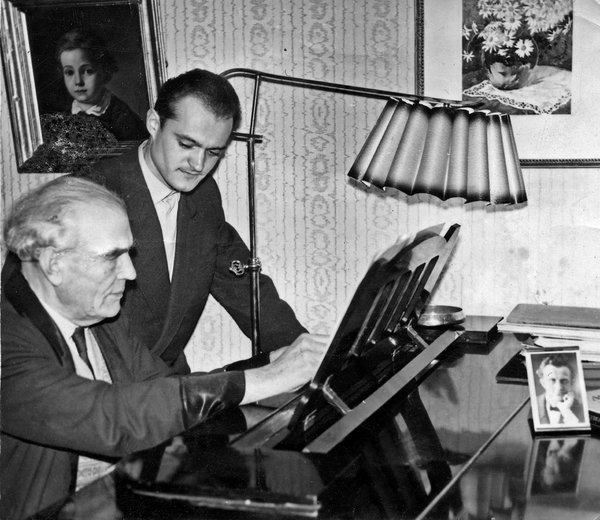 It’s the perfect match: a major Orthodox cultural figure celebrated by a pre-eminent Orthodox institution. But the Arvo Pärt Project also opens up a more complicated issue: What does it mean to speak specifically about the religion of a composer whose music’s spirituality has been interpreted so broadly for so long?

“There’s this kind of universally accessible spirituality going on, and yet it evidently has some particular sources in the context that he locates his own prayer life,” said Peter Bouteneff, a professor of theology at the seminary. “It’s where he goes to church, it’s the texts that he reads, the ancient Greek fathers,” he added. “This is what feeds his soul, and therefore: Is there some connection between this universally perceived and universally accessible spirituality, and the particular foundations in Eastern Orthodoxy?”

It is a question that Mr. Pärt is not quite comfortable answering, though he will receive an honorary doctorate from the seminary. When asked about the religious content of his music, he responded: “I am actually writing music for myself, based on my own cognition. Because of that, it reflects values that are important to me.”

“If the listener also perceives what I felt while composing, I am very happy about it,” he added. “I am not taking the task in my music to discuss some religious or special Orthodox values. I am trying to reflect the values in my music that could touch every individual, every person.” 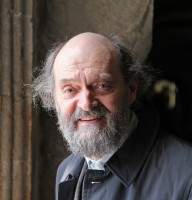 Mr. Pärt’s fervor did not always work in his favor. He first made waves in the Estonian compositional world for “Nekrolog,” an orchestral work critiqued by Soviet censors for its 12-tone language. The 1968 premiere of “Credo,” his first overtly sacred piece, drew further negative attention. This time, it was not the music but the title that irritated the authorities: The religious message was interpreted as an act of political dissidence. (The music theorist Yuri Kholopov once remarked that “God and Jesus Christ were bigger enemies to the Soviet regime than Boulez or Webern.”)

Mr. Pärt was unofficially censured, his music disappearing from concert halls. In a radio interview the year of the “Credo” premiere, he attempted to voice his beliefs publicly. Questioned about his main influences, Mr. Pärt responded: “Of course, Christ. Because he solved his fraction perfectly, godly.” The section was edited out of the broadcast version, to avoid a government ban.

Following the “Credo” controversy, Mr. Pärt fell mostly silent. He converted to Orthodox Christianity in 1972 upon marrying his second wife, Nora. When he re-emerged in 1976, it was with the crystalline stillness of “Für Alina,” the first composition shaped by his tintinnabuli technique: a weaving-together of melodic lines in which one voice outlines a chord while the other circles around it.

It would be easy to view Mr. Pärt’s compositional arc as unique to his personal vision, but it was also in line with an international exodus from serialism that began in the mid-’60s, looking inward and backward. He pored over the writings of the early church, and immersed himself in medieval chant and Renaissance polyphony. The sparse, gothic music for which he is known emerged out of that period of study. Today, “Für Alina” and its complement “Spiegel im Spiegel” — ubiquitous from film soundtracks and as accompaniment for modern dancers — represent études in Minimalist technique that point toward more promising developments.

Tintinnabuli comes to fruition in Mr. Pärt’s masterful choral works, including the 1997 “Kanon Pokajanen.” But it is music that also presents a conundrum for the secular listener, one who might seek out the spirituality of classical music at large rather than that of the Orthodox church. 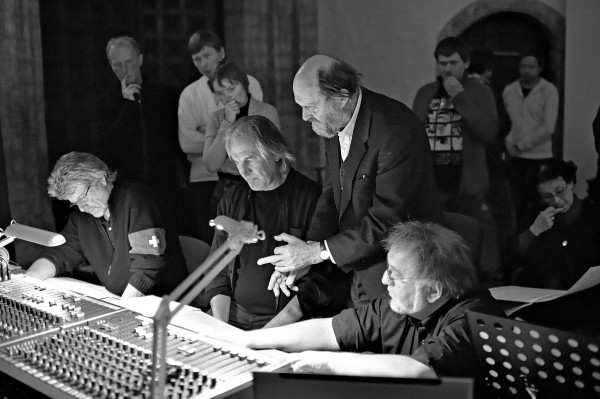 These works are rhetorically charged, their most effective musical moments matched to the message of their sacred creeds. Mr. Pärt once wrote of the “Kanon Pokajanen”: “I tried to use language as a point of departure. I wanted the word to be able to find its own sound, to draw its own melodic line. Somewhat to my surprise, the resulting music is entirely immersed in the particular character of Church Slavonic, a language used exclusively in ecclesiastical texts.” The exactitude with which Mr. Pärt sets the text is consistent with Orthodox theology, which stresses the reciprocity between beauty and truth.

Historical distance has tempered the explicit Lutheran message of Bach’s cantatas or the Roman Catholicism of Palestrina’s Masses. Disregarding the scriptural details of Mr. Pärt’s music, though, might mean ignoring an aspect integral to a living composer, even if he is vague about it.

The perspective also follows a trajectory of thinking about Mr. Pärt that dates back to the 1984 album “Tabula Rasa,” which started his collaboration with the ECM label and its producer Manfred Eicher. The elegantly wrought abstract spirituality of those records has helped position Mr. Pärt as a composer for all faiths. The global classical music market has mediated — or perhaps tamed — his religion, opening up the iconography of the Orthodox church to a broader mysticism.

It is that tension that the Arvo Pärt Project will explore. “Some of the classic things that are observed about Pärt, and even expressed by him, are these utterly universal human realities, like the interplay between suffering and consolation,” Dr. Bouteneff said. “That’s the whole logic of tintinnabuli as well, that you have the melody voice, which is the human straying, and the triad voice, which represents the divine stability and consolation.”

But there are narrower implications for Orthodoxy that Dr. Bouteneff said he hopes the project will address. “What has our liturgical tradition done with that dynamic? And how might that feed into what Pärt is doing?” he asked.

This dichotomy is particularly evident in Mr. Pärt’s 2009 “Adam’s Lament,” his most recent large-scale work and the centerpiece of the Carnegie concert. In a program note, Mr. Pärt described Adam as a “collective term which comprises humankind in its entirety and each individual person alike, irrespective of time, epochs, social strata and confession.”

But embedded within these universalities are the particularities of an Orthodox tradition. “Adam’s Lament” sets text in ecclesiastical Slavic, written by the Russian monk St. Silouan. Mr. Pärt wrote, “I wanted to remain as close as possible to Silouan’s words and, as far as I could, to entrust myself with them, to internalize them.” The music, bleak and majestic, is far from the placid sound world of “Für Alina.” Toward the end, the chorus takes on a declamatory tone, singing in a menacing unison as it describes Adam’s sorrow: “Only the soul that has come to know the Lord and the magnitude of his love for us can understand.”

In recent years, Mr. Pärt has castigated the Russian president, Vladimir V. Putin, dedicating his Fourth Symphony, of 2008, to the imprisoned Russian oligarch Mikhail Khodorkovsky. Asked about the current crisis in Ukraine — which threatens to spill into Estonia — he said, “I am very critical of Putin’s government and absolutely shocked about the latest event in Ukraine.”

Mr. Pärt said that Mr. Putin “spread around him massive amounts of hostility and aggression, which has its own dynamics and can now only grow. You cannot take it back anymore. There is no control over it today. It cannot be called anything else but a crime. It is more than a crime.”

But, just as he hesitates to link religion and art, Mr. Pärt shies away from an overtly political interpretation of his music. “I have never participated in political art,” he said. “My compositions have never been political, even the ‘Khodorkovsky’ Symphony has really nothing to do with politics. It is written on text of prayers.” 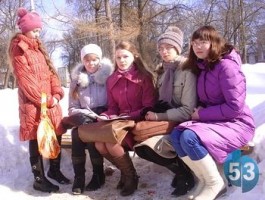 April 1, 2013 Students of a school of art in the Russian town of Borovichi are…

Most viewed articles
Seven Lessons for the New Year from St. Seraphim of Sarov237
A Great Time to Join the Orthodox Church173
New Jersey Governor Signs Bill Legalizing Abortion Up To Moment of Birth105
The Way of Christ Is The Way of Love71
Metropolitan Hilarion Celebrates the 20th Anniversary of His Episcopal Consecration58
Brooklyn Street Co-Named for Antiochian Pastor Who Served a Half Century There43
Metropolitan Hilarion: the Church and traditional confessions have done everything possible to improve the situation in Kazakhstan40
Sunday of the Samaritan Woman1
How We Worship: the Struggle of the American Experience1
4-400×6001
Most popular authors
Priest Luke A. Veronis237
Frederica Matthewes-Green173
Ryan Foley105
Pravmir.com team98
Fr. Theodore Stylianopoulos71
Peter Samore43