Source: The National
Haneen Dajani | 27 February 2017
CAIRO // Muslim scholars and Christian leaders from 50 countries, including the UAE, will issue a declaration on Muslim-Christian coexistence after a two-day conference. 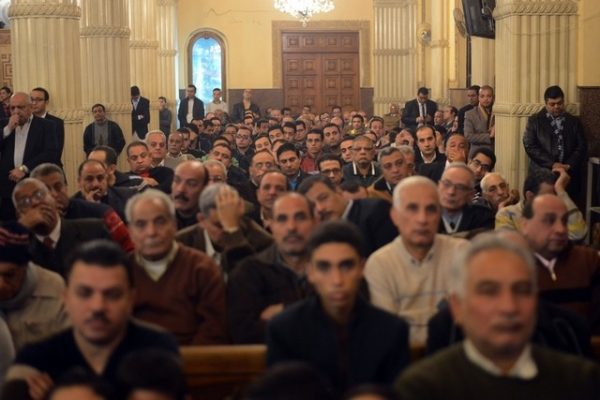 As they hold discussions on Tuesday and Wednesday, religious and political experts will explore ways to promote social harmony for all faiths living within Arab and Muslim nations.

In the Egyptian capital where terrorist attacks on churches have taken place, those taking part will discuss recent experiences and what needs to be done to embrace diversity and integration.

The conference is organised by the UAE’s Muslim Council of Elders and Al Azhar, the global seat of Sunni Muslim learning, based in Cairo.

Muslim and Christian religious figures need to lead by example and spend more time harmonising so members of society will follow their footsteps, said Anba Ermia, General Bishop and president of the Coptic Orthodox Cultural Centre.

Bishop Ermia was speaking ahead of the conference during a visit to Saint Peter’s church, where a bombing in December killed 29 people.

“It is in the nature of Arabs to be influenced by their religious leaders, so when they are seen together some will reconsider their rejection of the other,” he said.

When such discussions are held, the door remains open for feedback and further discussion, Bishop Ermia said.

“We don’t hold talks and that’s it, we let the people ask questions and raise inquiries, because this is a meeting of ideologies,” he said.

Interaction in daily lives and during social occasions is essential for promoting tolerance by convincing the public they are working together, Bishop Ermia said.

“In some villages, you don’t see the priest and the imam exchanging social greetings, so the people aren’t used to building bridges between them,” he said.

The conference will conclude with the adoption of Al Azhar’s Declaration for Muslim-Christian Coexistence.

“This conference follows a series of interfaith dialogues that took place in Italy, France and Abu Dhabi that aim to highlight Islamic tolerance with all religions,” said Dr Ahmad Al Haddad, head of Dubai’s fatwa department and a member of the Muslim Council of Elders.

“This enforces the Islamic approach, which co-existed with all religions in the Orient, and treated them with respect by preserving their churches, temples, priests and so on.”

Bishop Ermia said an example of how walls between faiths could be broken is the Egyptian House joint programme between his centre and Al Azhar, which brings together Muslim and Christian clerics.

When they started the programme in April 2011, they noticed the men from each faith split on two sides of the room while eating.

“So we changed their seats and mixed them together, but still each person only stared at his plate,” Bishop Ermia said.

“So without them knowing, we split them across the rooms so that each Christian will share a room with a Muslim.”

A total of 220 Muslim and Christian clerics have graduated from the programme, he said.

Most viewed articles
Glorying In Our Weaknesses152
The Cross, the Goo, and the Butterfly75
Conference “World Orthodoxy: Primacy and Conciliarity in the Light of Orthodox Teaching” Starts Today69
Bp Timotei: Orthodox Youth Association members are Christ’s “mystical disciples” who are not ashamed to profess Him51
St Alexander Nevsky Cathedral in Howell, NJ, Hosts Diocesan Celebrations of the 800th Anniversary of Its Patron Saint42
Timișoara: Midnight Liturgy and procession with relics on 65th anniversary of canonization of St. Joseph the New41
Will Everyone Be Saved?26
Metropolitan JOSEPH’S Encyclical for the Year of Youth12
A Noetic Life5
Most popular authors
Archpriest Michael Gillis152
Pravmir.com team111
Aurelian Iftimiu92
Fr. Jeremy75
Jacob Sparks26
Archbishop Joseph of New York and Metropolitan of All North America12
Archpriest Stephen Freeman4
Maria Trushanina1