Muslim Condemned to Death for Killing 2 Copts in Egypt 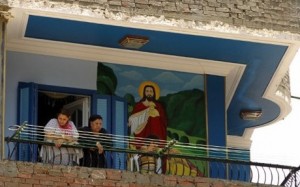 A Muslim man was sentenced to death on Monday after having been found guilty of killing two Coptic Christians in southern Egypt in 2011, court sources said.

The court in Sohag, 500 kilometers (300 miles) south of Cairo, convicted Mahmud Abdel Nazir, 50, of having killed two Copts, wounded three others and started a fire to avenge what he called the murder of his brother by a Copt.

The death sentence has to be confirmed by Egypt’s Grand Mufti.

Coptic Christians, who comprise up to 10 percent of the country’s 83 million people, have complained of a spike in sectarian attacks since a popular uprising overthrew president Hosni Mubarak in early 2011.