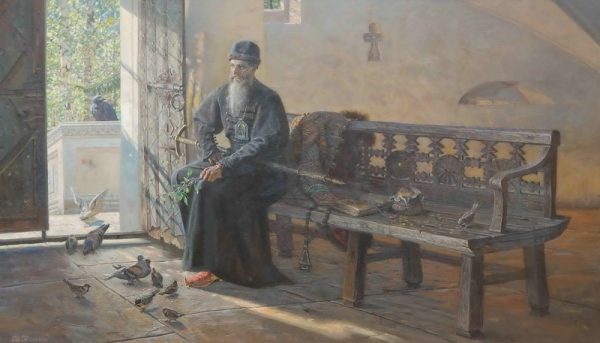 Image by Pavel Viktorovich Ryzhenko (1970-2014). It was taken from www.house-art.com.ua

These words of Christ, said on the cross, are very impressive. It’s difficult to find another expression, which more obviously shows His human nature. How profound is the tragedy of our Lord and it shows how great is His Self-sacrifice for our salvation. There is no other occasion where we can see how much He is similar to us. By these words, He becomes the symbol of all people with suffering.

“My God, My God, Why Have You Forsaken Me?” During history, human beings justifiably asked this question and will continue to ask it. As long as the world exists, evil and suffering will exist and so the human beings will continue screaming:

In reality this issue is the most sensitive and painful one in the subject of man-God relationship. And limited human logic is not enough to find an answer to this question. In philosophy and theology, there is a division called theodicy, founded by the German philosopher Gottfried Leibniz (Greek: Theo-dike՛ (k=c in French) judgment – God’s judgment) which deals with this issue; however, there is no complete answer.

– Why are good human beings suffering and evil ones are happy?

– Why are some good people dying early because of sickness and some evil ones are living a long time?

– How can we explain the evil that exists in the world with the fact that God is almighty and just?

Vladimir Pozner, one of Russia’s most prominent journalists, challenges faith: “Maybe I can understand why good people are suffering, because although they are good, they may commit some mistakes or sins, but how can you explain the suffering of innocent children?”

Now can you imagine that everyday an estimated thirty thousand children are dying because of the poverty, famine and wars in the world? Thirty thousand innocent children every day. Truly it can be said, “My God, how can I understand you…?”(Vahan Tekeian).

When such tragedies happen far from us, we can find some “explanation”. But the dilemma starts when we ourselves become a part of such tragedies and we can ask. “My God, My God, Why Have You Forsaken Me?”

The person who can understand and feel this issue without being part of it is blessed; and actually Christ is calling us to be such a person and to be sensitive to the pain of our brothers and sisters, and enemies as well.

There is no better way to find an “answer” to this question than to consider the Armenian Genocide. For my nation, Armenians, the Genocide is the most painful issue. Here is a clear example: The first nation ever who adapted Christianity as a state religion in 301 A.D., the nation who had the desire to be a part of the civilized world and was demanding its basic human rights, was annihilated by the barbarians.

Jews during the Holocaust asked such questions and a well known conception came to the front on God suffering together with His people in the concentration camps.

There is another example and it’s considered to the Genocide survival Areknaz Kocharian from Philadelphia, who passed away several years ago. Her daughter Mari Zakarian says:

-In the spring of 1980 I interviewed survivors of the Genocide in Philadelphia for the Armenian Assembly’s Oral History program in Washington D.C.

As I interviewed the survivors of the Genocide, the image of my mother in prayer stayed with me, her eyes lifted toward the heavens, her hand making the sign of the cross. One day as she was praying, I asked how she could believe in a God who had allowed the bloodshed she had seen. In a moment of human failing I cried, “Where was He?”. “Hush, my lamb” she said, “He was right there with us. God was right there among the dead and the dying”. She continued to pray.

How impressive are the words of this Armenian simple and uneducated woman, who came to the same conclusion as above mentioned intellectuals who thought of God suffering together with His people.

Truly it is difficult to find another answer to this major question. God himself suffered and is continuing to suffer with His own people.

As a pastor I have been a witness to such an experience. When I was serving in New York City I had the chance to know an Armenian woman, named Janna, who was working in the Armenian Nursing Home in New York City. She was in her sixties. She became a widow early and she was a survivor of the Armenian massacres in Baku, Azerbaijan. People used to call her “skorie pomash” (ambulance in Russian) because she was a very helpful and giving person. After coming to America and after her children were grown and married, it seems it should be time to bear the fruit of her good behavior and her suffering. But she was diagnosed with cancer.

When her illness started, I was In New York City. When I moved to Massachusetts, I was regularly in contact with her. One day I had a call from her daughter. I understood that there was no hope left and she was going to die. I went to the hospital to see her. She had changed in a very bad way. It was difficult to see her in that condition and therefore I myself was struggling with God. It came out from my mouth: “God is with you”. She turned away her face from me. I understood that she herself was struggling with God and what I said was not the right thing to say at that time. When I visited her again several days before she passed away, I gave her the last communion and a neshkhar (the bread used in Armenian Church for Communion). I was very concerned how she would pass away from this world? Upset with God or in peace with Him? During the funeral I was consoled, because I was told that during last days and hours of her life here on earth, she was kissing the neshkhar and she passed away in peace and harmony with God.

Anyone who is passing through the experience of death – in other words one foot is here and one foot there – their eyes open. For this reason most of the people pass away in peace. There are some exceptions. Those are the ones “Who curse again the Holy Spirit”, in other words the ones who totally and finally cut any relationship with God, people who cut all bridges with God and good.

And this is not a dream, or an illusion, or a fake effort of religious propaganda. This is a fact and reality. Faith in the eternal life and the resurrection is the answer to this question.

When human beings are facing injustice and difficulties they may ask such questions, and they may find the answer if they are able to open their eyes. In other words if they can find the power and ability and by the grace of God overcome the limited borders of the human logic and look at these things with their hearts and souls.

And Jesus Christ answers: “Father, into your hands I commit my spirit”. Luke 23.46