Going to Church for Medicine 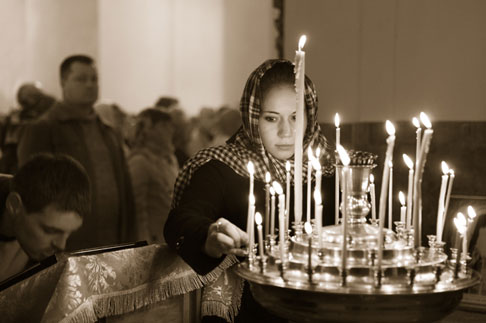 My path to the faith was special like everyone else’s, although there was no particularly extreme situation in my life. I was doing pretty well. I had everything: work, money, friends, books… Yet suddenly I felt a terrible crisis growing inside. It kept getting worse for me. Even the most interesting events and adventures did not cheer me up, and had an opposite effect for some reason. In a nutshell, my state then could be called as some inner emptiness and disappointment in Life.

I began to realize that the problem was something spiritual. I started looking. This search was somewhat too rational which was “not typical for a woman”. I started reading a lot. That time, in the post-perestroika period, Moscow was flooded with numerous sects. I remember how one day on my way home from subway I managed to buy a whole stack of sectarian literature of all sorts. I came home and honestly started reading. I did not like it, and everything ended up in a trash can. God was merciful.

Then came Buddhism. After all, I was not just anybody, excuse me, I was all but intellectual elite: I was not going to go into the wilds of some Orthodoxy, which was professed by all sorts of evil old women and bigots! I would not take an interest in the religion of slaves.

However, the period of Buddhism passed as well. Then I got acquainted with Taoism. Yet it was also not satisfactory. At the same time, some people tried to pull me into the “Church of Christ”. I constantly met one person at the subway station and he just demanded that I went to their meeting in the Central Youth House. Yet no matter how he lured me with stories of his successful advance in office, no matter how much he said he began to understand much more in life, I did not listen to him. If I got into that “Church of Christ”, I would have got hooked on that mass hypnosis.

I, poor devil, have been pulled into many things… Into Grof’s Holotropic Breathwork… Into too many things to recount. You do not even ask them, and they are pulling: it is either Jehovah’s Witnesses or someone else. There turned out to be some Adventists among my acquaintances. Can you imagine how many terrible things threatened me?! The demon walked nearby roaring, looking for someone to devour. Yet God saved me. For at that time I met a couple, Orthodox people, who got married in a church. They neither pulled me anywhere nor made me go to any church. They were just my friends, and I subtly observed their married life. That is what brought me to the Church.

Although their life was far from exemplary. Of course, they did not hit each other, but Pasha, the father of the family, an artist, often disappeared: either he was in a studio or he traveled to Arkhangelsk, to the Monastery of Optina. When it became quite unbearable, Lena, his wife, who later became my godmother, began to quarrel with him: exclaiming, for example, what kind of husband he was: completely indifferent, did not educate their children, did not make money, and he himself was often absent. Several times I witnessed a scene, when she shouted, “That’s it, I cannot live with him!”, packed her things, and left. Yet each time they made up. This seemingly completely unreliable construction turned out to be well linked and joined. I thought looking at my friends: how did it work?! Everybody around was getting divorced or breaking up. And they had been living together no matter what. Then, with my unbaptized mind, I came to an idea that they were united, held together by some magical, miraculous power that was given to them at the church wedding.

Then I decided to try going to that church, to see what is going on there. I got baptized… At first, I did not like it in the church. However, my approach was based on reason, I derived it from logic, and I understood that it was highly unlikely that I would like it in the church. And I decided that I simply needed to overcome this state. I was even ready to spend several years to understand the mystical side.

Actually, I used to be a believer when I was a child. Probably like all children were. I knew that there was God. I remember perfectly that when I was little, I talked to Him, turned to Him for help, prayed. After all, every person has a Christian soul. Having come to the Church, I only had to realize that God of the Orthodox Church was the One, to Whom I opened my heart before.

I came to the church for medicine.

Of course, baptism changed me a lot, but for a long time little, if not to say very little, was open to me. Apparently, the love to God and Holy Mother did not open because of my pride. Yet based on the thesis that the church was medicine for me, I was ready to do what was supposed to be done. And I did it. I went to confession to different priests. Yet only after coming to my future spiritual father did things move forward.

My future husband Misha introduced me to Father Artemy. I did not realize then that it was a bride-show. The priest started listening to my confession. He did not tell me it was a “global” confession. Just like a good surgeon he removed my tumors and opened up ulcers, which I could not heal myself. I was very ashamed that my mind covered sins with the veil of forgetfulness. He pulled everything out. After this confession I flew out of the church on my wings! I was literally jumping: I was so relieved, I felt so good…

It is right that the first ten years in a church are considered to be the period of “neophytism”. In the old days, people could not have a say in something or publicly theologize until the end of this period. Indeed, after ten years you are crossing a certain threshold. For example, I realized that I did a lot nominally.

One day, when I woke up, I asked myself, “Why do I actually go to church on Sunday? So that I would not be ashamed before my Orthodox friends?” It turned out that all my religiousness was based on my own vanity. “I will not go,” I decided then. “Actually, I want to sleep. Ultimately, what a hypocrisy it is.”

Time went by, I did not go to church and I was monitoring my condition. Suddenly I realized I was getting terribly depressed and discouraged, life was losing meaning again. Although at least I prayed at home: I followed morning and evening rules, read akathists to my beloved saint. Yet no matter what, I felt sad. So, as usual (I am a maximalist, after all!), I drove myself into a completely sad and miserable state. At that moment I started going to church again. Only then I realized that it was air and food for me, that I could not live without the faith, without the church. I felt like I was a part of it. Not because it was said so in a book. But because I loved these parishioners, with all of them being different. We all have made up one body. I felt good in the church, it was the source of life for me and its meaning. For here life is earthly and temporary, and it continues in eternity.

So, after the second crisis, I understood, I found the faith with my heart. It happens by itself. One just needs to endure. There can be a lot of hardships and tragedies in life. The elders say that everyone will have their own Calvary. Our priest also says, “Living with the cross is much easier than without it.” This is actually when one becomes sick at heart.