“My Lord and My God”

It is we. We did not see the Lord during the time of His earthly life. But we see Him with our spiritual eyes; He is alive among us, and we do not need to touch Him. How many people there were who saw Him with their own eyes, who heard His word, who followed Him on the road – and did not believe, because their hearts did not respond to Christ’s call. But we have responded to this call; weak, infirm, and different as we are, we have all come to the Lord with the words: “My Lord and my God.”
Archpriest Alexander Men (+1990) | 26 April 2012 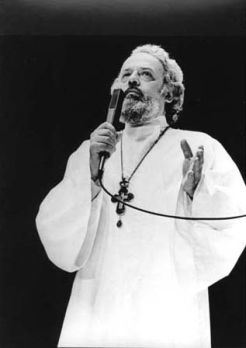 Today is the day of the Apostle Thomas. You will recall that the Lord appeared to him specially. Ten disciples were gathered together when the Lord, having conquered death, came to them and said: “Peace be unto you!” These are precious words: He brought peace to the souls of men, that same peace that now comes to you. He speaks with them, sending them out to preach the word of God. But one among them is not there: Thomas. And when he does come, everyone rushes to him, saying: “Thomas, our brother! We have seen the Lord, we have seen Him alive, we have touched Him!” And such pain and offence boiled up in Thomas’ heart that he said: “I do not believe!” Although ten people, his brethren, had told him this, he said: “I will not believe until I touch His wounds with my own hands and feel His body, come to life again.”

Then the time comes when the disciples are again assembled behind locked doors, for they feared persecution, and suddenly a familiar voice is heard, the voice of Jesus: “Peace be unto you!” And He is standing among them. The first to whom He turns is Thomas. Jesus says: “Thomas, stretch out your hand to touch My wounds, assure yourself, verify.” Of course, Thomas did not do so. Just seeing the Lord, he fell stunned before Him with tears: “My Lord and my God!” Jesus said to him: “You have believed because you have seen. But happy are those who believe without seeing.”

Just who are these? It is we. We did not see the Lord during the time of His earthly life. But we see Him with our spiritual eyes; He is alive among us, and we do not need to touch Him. How many people there were who saw Him with their own eyes, who heard His word, who followed Him on the road – and did not believe, because their hearts did not respond to Christ’s call. But we have responded to this call; weak, infirm, and different as we are, we have all come to the Lord with the words: “My Lord and my God.”

This is all that needs to be said, as if we indeed felt the Lord, for everything surrounding us is from Him and everything is His. I recall a scholar who spent many years in the study of flowers, trees, grasses, and plants and animals in general. He recorded all this, assembling enormous records that for thirty years, to this day, have been used throughout the entire world. When he completed his work and had described living creatures, he said: “God has passed by before me; I have felt Him in His creation.”

Indeed, the sun above us is the eye of God; the breathing of the wind is the voice of God; all the laws of this world are the laws of God; all the vicissitudes and turns of our fate – this, too, is the Lord. We also feel and see Him in prayer, in Holy Scripture, and in the Mysteries. When the Holy Chalice is brought out to us, that is the living, real Lord, Who is present here in this church, as in all the churches of the land. And not only in churches, but everywhere where people pray to Him: to the far north, in deserts and mountains, and in populous cities, where there are crowds of millions. Everywhere there are souls turning to the Lord, and they see and feel Him, for which reason they are a hundred-times happier and more blessed than those who lived two thousand years ago, but did not believe in Him. The Lord is with us: He is here, living, risen, and blessing us. And today we, along with His Apostle Thomas, bow down before Him, saying: “Lord, You are alive before me, my Lord and my God!”

Most viewed articles
Five Signs of a Modern Pharisee208
ROC Holy Synod Discusses the Announcement of the Patriarchate of Alexandria Concerning the Establishment of the ROC Patriarchal Exarchate of Africa154
Bad Habits And Their Cure109
Medical Workers Walk 1.5 Km Through Snowdrifts and Save the Life of a 100-Year-Old Woman106
Trial of Politician Defending Traditional Marriage Begins in Finland90
Grains of Wisdom and Piety Book Published86
150th anniversary of the establishment of the North American diocesan see in San Francisco50
Time for a Course Adjustment?31
Church from time of St. Stephen the Great becomes monastery15
Most popular authors
Pravmir.com team486
Archimandrite Markell (Pavuk)208
Saint Nicodemus the Hagiorite109
Fr. Stephen Powley31
Ștefana Totorcea15