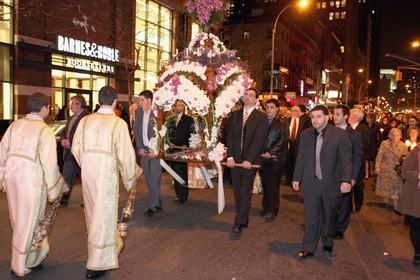 (Photo/Patterson Graham)
A scene from the procession of the Epitaphios at the Sts. Constantine and Helen Greek Orthodox Church in Brooklyn, N.Y., a solemn holiday for the faithful.

Despite a sizeable Orthodox Christian population in New York City, public school teachers are not permitted to take Good Friday off with full pay, as is the case for Roman Catholics, and for Jewish citizens who can do so on their holidays. An Orthodox Christian teacher of Greek descent, who didn’t want his name used, brought this matter to the attention of The National Herald. He said he was made a formal request to take off the Good Friday holiday. In many years, it is not an issue because it corresponds with Passover and Holy Week for western Christians, but this year Orthodox Pascha occurs more than a month later, on May 5. When the teacher formally applied for the day off, it was approved, but he was later informed that his pay would be docked, however, to cover the costs of a substitute teacher. He ended up having to use a personal day, but said he felt that policy “is like a slap in our face.”