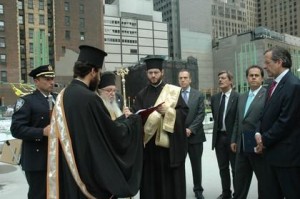 NEW YORK – The new home of the parish of St. Nicholas in is not ready for a congregation or for its first Divine Liturgy in downtown Manhattan since September 9, 2001, but its newly poured and dried concrete base welcomed Antonis Samaras during his first trip to the United States as Prime Minister of Greece. Archbishop Demetrios of America led Samaras, his entourage, members of the press, and officials of the Port Authority of New York and New Jersey, including Executive Director of the Patrick J. Foye and Louis Koumoutsos, the recently appointed Chief of the PA’s police department, to the remarkable space overlooking the 9/11 memorial at the southeast corner of the World Trade Center. The Archbishop presided over a memorial service for the men and women who perished on 9/11, including many Greek-Americans.