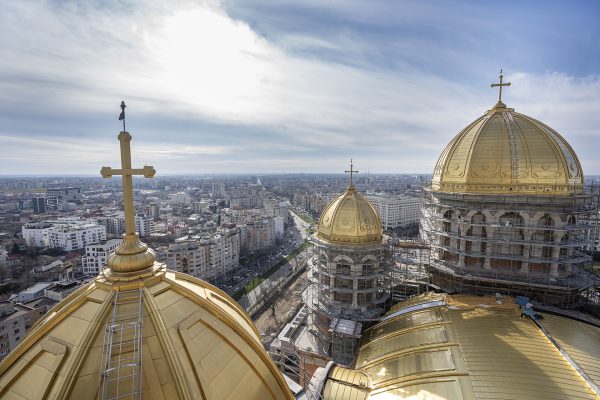 The person who designed Romania’s National Cathedral, Architect Constantin Amâiei, spoke at Digi24 about the entire construction process, the concept, and what the Cathedral will look like after completing the works.

In a dialogue with Lucian Mîndruță, the architect mentioned that the project started as an idea over 130 years ago but was resumed only after 1990.

Constantin Amâiei briefed the steps made by Patriarch Teoctist for the location, project competitions, etc.

“When Patriarch Daniel came, he completely changed the rules of the game so that we would not have such failures, with all kinds of models, ideas and questionable locations. He said: we do concrete things. He established the final location, the one on September 13 Ave and established it legally, with documents, so that there would be no problems,” Constantin Amâiei told Digi24.

About the concept of the project, the architect said: “The National Cathedral, being called of the nation it had to represent the Romanian people, both historically and culturally and be representative for the Romanian Orthodox Church.”

“It was kind of a collective concept; it wasn’t just what inspired me. Usually, the architect is the project manager, and he does the overall project. But, in the case of the Cathedral, it was a collective approach,” the architect of the National Cathedral confessed.

“The main tower is the basic symbol of the building, the Ascension. Six smaller towers represent the six days of the week, and the seventh is infinity. Together with Patriarch Daniel, a theme was made that contained everything; he gave an imposed theme. We had to keep the basic ideas as they were and come up with innovations but without major changes,” Constantin Amâiei explained.

As a style, the aim was to be close to what a church is in the collective mind, the architect added.
“The cathedral is, in fact, the church of the churches in Romania, and then I could not make a different temple or different architecture than that of a church.”

The architect Constantin Amâiei pointed out that the building has a height of 120 meters to contrast with the People’s House.

“This is how it was designed, to be very elevated in contrast to the People’s House, which is 80 m wide and high. The idea was for the two buildings to be in contrast, the Cathedral to be built vertically. Because of this, the proportions are different. We have a small base with a height of 120 m.”

He explained that although it is very high, the Cathedral will have no problems in the event of an earthquake: “It was practically inserted in the ground, and even during a magnitude 9 earthquake there will be no problems.”

The architect admited that there has been a lot of criticism about this project and that he considered that “at least from the point of view of the concept, it probably should have been more modern, although tradition matters as much in this case.”

How will the National Cathedral’s architectural ensemble look like

“The Cathedral will be in the centre of an architectural ensemble,” the architect reminded, “meaning the church in the middle; it has a huge pedestrian square of about one and a half hectares in front of it, where big religious celebrations will take place.”

“All the cathedrals have a courtyard in front, where many people gather. Side colonnades border this square. Initially, in four corners were designed four apostolic buildings. There were small palaces in the same style as the Cathedral architecture, which completed the Cathedral’s precincts as a monastery. The idea of a monastery precinct. Two of them were abandoned,” the architect revealed.

Constantin Amâiei also said that the temporary chapel in front of the Cathedral will not exist after completing the works and that, likewise, the surrounding wall will not remain. Instead, everything will be pulled down and will be replaced with a much more transparent fence.