Nativity of the Most Holy Lady, the Birthgiver of God

The icon for the feast of the Birth, or Nativity of our Most-Holy Lady, the Birthgiver-of-God and Ever-Virgin Mary is replete with symbolism which is most profound, and possibly not readily apparent when first viewing it. The central figure in the icon is the figure of the Holy Forebear-of-God, St. Anna, the Mother of the Birthgiverof-God.
Priest Dennis Kristof | 21 September 2010

The icon for the feast of the Birth, or Nativity of our Most-Holy Lady, the Birthgiver-of-God and Ever-Virgin Mary is replete with symbolism which is most profound, and possibly not readily apparent when first viewing it. The central figure in the icon is the figure of the Holy Forebear-of-God, St. Anna, the Mother of the Birthgiverof-God. She is the one who along with her husband Joachim, had been barren for years. Late in her life she miraculously gave birth to her child Mary who was destined to become the Birthgiver-of-God. St. Joachim is the only male depicted in the icon and we see him contemplating both his daughter, the Birthgiver-of-God, and the miraculous nature of the feast. In a way, he parallels St. Joseph in the icon for the Nativity of Christ, but we do not see Joachim undergoing temptation by a demon as we do Joseph. 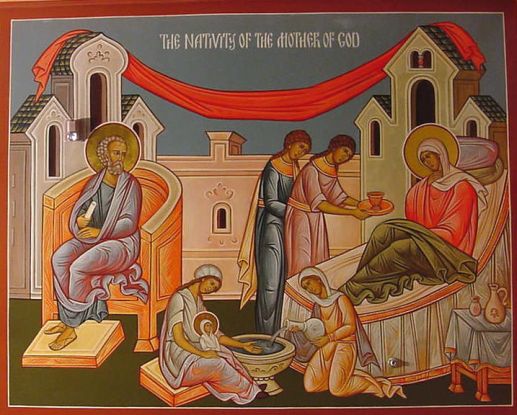 The events are happening indoors due to the presence of a curtain being suspended above some vague architectural forms. This technique is often used in iconography because the physical surroundings are not what is important when contemplating the feast. They are excluded so as to not interfere with the purity of the mystery. The fulfillment of the promise that Joachim and Anna would miraculously give birth to the Ever-Virgin late in their lives is what is preeminent for believers.

St. Anna is usually clothed in red, and she is prominently depicted in the center of the icon. The color red symbolizes motherhood, especially childbearing. She is being attended to by a number of midwives. Mary is generally depicted in white swaddling clothes wrapped so as to bring to mind a burial shroud. This parallels the Nativity icon of Christ wherein He is generally depicted in a like manner, a prefiguration of the death He would suffer for our salvation. In other icons for this feast, Mary is sometimes depicted like a little adult in miniature, even to the point of being fully clothed in the familiar clothing present in icons of the adult Birthgiver-of-God. Historical details are not as important as is the mystery expressed: We anticipate already that she is the one who will bear God in the flesh, and her Son will embrace Death so that He could conquer it. In this icon, Mary predicts Christ’s salvific work in the same way that the icon of Christ’s Nativity anticipates it. The kontakion for the feast explains it well: By Your birth, Most-Pure Virgin, Joachim and Anna are freed from childlessness; Adam and Eve from the corruption of death; and we, Your People, freed from the guilt of sin celebrate and chant to You: The barren woman gives birth to the Birthgiver-of-God, the Nourisher of our Life! Joachim and Anna were blessed and relieved of the curse of childlessness. But the central theme of the feast is that the one who would give the Word of God flesh when He becomes Incarnate in this world begins her vocation today on this feast of her birth.

Anna is shown gazing on the daughter she has born. Joachim, Anna and Mary are generally depicted in a proportionally larger form than the midwives because Mary and her parents are the central characters in this event. The midwives are shown attending to St. Anna and the Birthgiver-of-God to serve as proof that it really occurred and was not a mere phantasm.

The details for this feast are not contained in the sacred scriptures. They come to us and have been preserved by Church Tradition in the feast day celebrations, art, icons, literature, and liturgy of the Church. The details for this story are contained in a book called the Proto-Gospel of James, an apocryphal book which contains many stories and legends about Jesus Christ and New Testament characters, but was never included as part of the corpus of sacred scripture. However, a number of our feasts are based on this book. Churches dedicated to St. Anna were built as early as the 4th Century, even though neither Joachim’s name, nor Anna’s are present in the Holy Bible. Honoring these two saints as Forebears, or Ancestors-of-God dates from the beginning of the Church’s recorded history. The Bible itself tells us that it is not sufficient in and of itself to preserve all that was taught and revealed by our Lord, God, and Savior Jesus Christ (John 21:25). These gaps of which the Apostle speaks can only begin to be covered by what we Orthodox have always called, Church Tradition which comes to us through the Liturgy. Indeed, the New Testament itself did not precede the Liturgy. Rather, the Liturgy preceded the New Testament. The Church determined the books that would comprise the New Testament by deciding which books were the most edifying and worthy to read as part of the Liturgy of the Church. The Bible is insufficient alone. One cannot truly know Christ or come to a personal relationship with Christ by reading and meditating alone on the sacred scriptures alone. One must live the life of the Church which is the liturgy of the Church to truly know Christ and His Bride, The Church!