Neither East Nor West

Is the Orthodox Church in the West growing or is it in decline? There are two problems connected with this question; the more important one I shall explain first. What do we mean by “growing”? There is a growth in numbers but there is also a growth in the Holy Spirit. Surely growth in the Holy Spirit must come first or else numerical growth might simply reflect social convention? In that case there would not be much depth and little enduring impact on society itself. 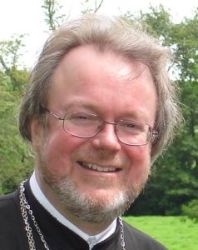 The second problem is merely statistical in that, (certainly where I am in the United Kingdom and Ireland), no local church seems to count its active membership. It seems that the numerical growth or decline of the Church may only be resolved by comparing stories and subjective assessments. However, I do believe that there is a certain reliable consensus amongst the Orthodox themselves. According to this shared view and experience, the churches born out of immigration are losing their young people because mixed messages are being sent out to them by their seniors and parents concerning language, culture and faith.

Like it or not, the young Orthodox I know as a priest here in the North of England do not see themselves as displaced Russians, Greeks, Arabs, Romanians or Eastern Europeans. They have been born in this country, they have gone to British schools, their friends are British, their first language is English, they self-identify as British. Some Orthodox look upon this assimilation to British culture as a tragedy. I will show in a moment why this need not be so, but for now we need to accept this reality for what it is.

Recently, a lady of Cypriot background living in London shared with me her sadness at the steep decline in the numbers of young people attending Saturday afternoon Greek school at her local church and, as we might expect, at Sunday Liturgy as well. Whereas 10 years ago there were over 300 young persons at the Saturday school, now there are barely 30. This pattern is repeated, I believe, right across the country. Imagine asking a teenage Theodore or Theodora why they don’t find attractive the prospect of spending their Saturday afternoons learning the Greek language or Greek dancing. Whilst their parents may sigh at this loss of language and culture, the reality is that it will be British popular music that is on their iPods not Greek. They do not need modern Greek to talk with their friends, still less do they want to learn a disused, (to them), foreign language, however venerable and loved by their parents to talk to and worship God.

This can be a very hard and painful lesson for Orthodox of a more senior generation to learn and accept. Rather than rise to the challenge of presenting the Orthodox Christian faith to the indigenous culture and in the local language, as once did Sts Cyril and Methodios to the Slavs, these culturally alienated folk retreat into a sort of ethnic ghetto where melancholy and tunnel vision stunt both spiritual and numerical growth. It is perhaps a hard thing to say but these people would rather see their children lost to the Church than sacrifice the language and culture that represents for them a nostalgic link to their far distant homelands. Yet they still cling fiercely to the belief that if only their children would learn the old language and appreciate the culture then they might repent and become again good Orthodox Christians. Nothing more stands in the way of a genuine growth in the Holy Spirit and therefore, numerically, in the extension of the Church in the West than these bankrupt ideas. They stifle Christian life and Christian mission and they are thoroughly un-Orthodox if not downright phyletistic and heretical.

Sometimes, sadly, such crippling ideas are fostered and maintained by the Mother Churches themselves who entertain such politically popular fictions as “Greece-outside-Greece”, “Romania-outside-Romania”, “Russia-outside-Russia”. This of course communicates to the indigenous British that Orthodox Christianity is a foreign religion, not for them. The real tragedy is that the young British of Greek, Cypriot, Russian, Romanian, and Arab backgrounds … who count themselves as British first … come to the same conclusion:- “Orthodoxy may be okay for mum, dad, grandma and granddad, but it is not for me.” Actually this is a double tragedy, for if they were to become active Orthodox Christians – by seeing that it was possible to be both British and Orthodox – they would also come to know and love Orthodoxy in the linguistic and cultural “dress” of their parents and grandparents!

Why is there this lack of confidence among some Orthodox people that Westerners can truly become wholehearted, faithful and stable Orthodox Christians? Surely it cannot be a lack of confidence in the gospel itself! If it is, then such lack of spiritual confidence is a warning sign that Orthodoxy as the one only true and full expression of Christianity for ALL peoples is not actually believed to be such by many who count themselves as faithful Orthodox. Worse still, it betrays a silent belief that the gospel can make no progress in the heterodox West. As such, this “bad-faith” is a betrayal of Christ Himself Who is the King and Lord of all creation; in whom there is neither East nor West.

In conclusion, yes, Orthodox Christianity is shrinking in the West – but it is only shrinking in those communities that do not actually believe in the power of the gospel to transform any culture. Such communities betray the legacy of Sts. Cyril and Methodius, of St John of Shanghai and San Francisco, of St Nicholas of Japan and of all those other countless missionary saints, amongst whom, I daresay, the holy men and women of Russia have been most strongly represented in the modern era.

So, respectfully but urgently, and for the sake of the salvation of millions of souls, I, by the grace of God, a lover of the true faith, implore all our historic Mother churches to help us evangelise these spiritual wastelands of our own beloved but orphaned countries. Here are my compatriots, betrayed by their various defunct heterodoxies, but now ready to be wakened to hear what foreign visitors to Jerusalem once heard at Pentecost:-

“Then they were all amazed and marvelled, saying to one another, “Look, are not all these who speak Galileans? And how is it that we hear, each in our own language in which we were born?” (Acts 2:7-8)

It is not an unworthy desire to see the gospel proclaimed and lived in one’s own language and culture. It does, however, require men and women who have confidence in the power of God to transform anything, anywhere and at any time. Would you count yourself amongst these?

Fr. Gregory Hallam is a priest of the Antiochian Orthodox Church. He serves a parish in Levenshulme, Manchester, UK.