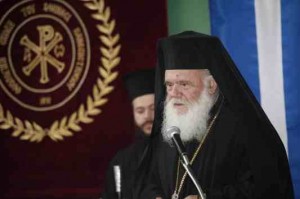 A company, known by the acronym EAEAP, aims at making commercial use of the substantial property owned by the Church of Greece.

This is what has been foreseen by the Ministries of Finance and Education, with legislation which would allowe EAEAP to be created in which the state and the Church will each hold a 50 percent stake after putting up half of the share capital, set at a total of €300,000 each, about $390,000.

The real estate assets will pass to the firm via a 99-year lease. Three people that will be appointed by Archbishop of Athens Ieronymos, one from the Finance Ministry and one from the Education Ministry will constitute the five-member board.

Revenues will be split between the Church and state. Since the start of the crisis, Ierynomos has been keen to show that the Church is not shirking its duty and has denied that it benefits from tax breaks, as reported by ANSAmed.

Almost since his accession to the archiepiscopal throne of Athens, Archbishop Ieronymos has tried to implement his idea concerning the co-operation between Church and State on the domain of the church property’s exploitation.

“Today, beyond the property of the Church, the income from the exploitation of which covers the huge expenses of its function, there is another important fortune that is inactive or in captivity,” the Archbishop said.

“A serious collaboration between Church and State on this subject with sincerity, honesty, transparency, punctuality and binding guarantees on behalf of the State for its exploitation, would be advantageous and the appropriate in this current social reality,” Ieronymos noted.

June 13, 2013 Archbishop Ieronymos of Athens and All Greece will be nominated honorary Doctor by the School…