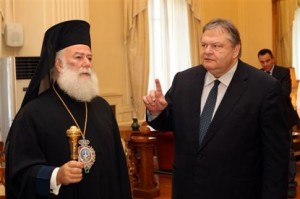 “Greece is connected to Africa with a strong historical and cultural bond,” Venizelos noted and added that Egypt is a key-country for developments in the wider area and a critical point for Greek foreign policy.

“The Constitution will function again, the country will be led again to free parliamentary and Presidential elections, any kind of conflict will be avoided and of course the free will of the people of Egypt will function,” Venizelos said.

Concerning his meeting with the Patriarch of Alexandria and All Africa Theodoros II, he pointed out that the basic issue of their discussion was the deep crisis in Egypt and in particular the prevailing situation and existing dangers.

Venizelos stressed that the Patriarchate of Alexandria and all the churches and institutions are absolutely safe and noted that there is full respect towards Orthodoxy, the Greek Orthodox clerics and towards the Patriarch personally.

The Foreign Minister pointed out that there is close cooperation with the Patriarchate of Alexandria and said, “We will deepen it in all domains, because for us it is always our advanced outpost in Africa.”

The Patriarch of Alexandria and All Africa thanked Venizelos for the support, and expressed his anxiety and sorrow for the latest developments in Egypt. He noted that he gives courage and strength to the Greeks of Egypt and added that, “The Egyptian people are close to us in many respects.”

The Patriarch concluded, characterizing Egypt as a door of Africa, noting that it is a huge country that will play an important role and added that, “It does not separate us from the Libyan Sea but unites us with it.”

June 13, 2013 Archbishop Ieronymos of Athens and All Greece will be nominated honorary Doctor by the School…