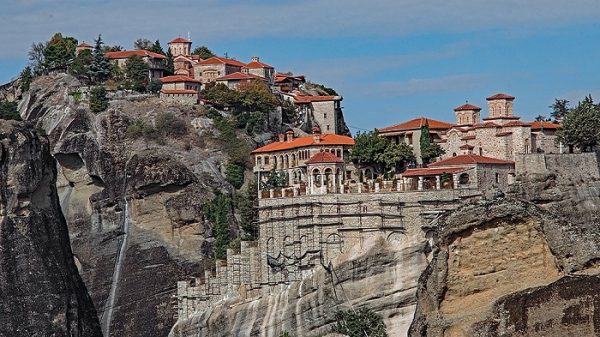 One of the spectacularly-situated monasteries at Meteora, Greece. Photo credit: DimitrisP67/Wikimedia Commons

Locked-down would-be tourists who are longing to visit Greece can still enjoy the magnificent views of the Meteora monasteries and even walk alongside the monks of Mount Athos using a new app called “VR Pilgrim.”

Just by using their own smartphone, tourists can enjoy 360-degree views of two of Greece’s most spectacular sites, the Meteora monasteries and the twenty monasteries atop Mount Athos.

Commenting on the VR Pilgrim app, Starets Kirill, Archimandrite of the cell of St. Nicholaos Halkias on Mount Athos, who was involved in the filming process, said “Two years ago, when we blessed VR Treasures for the creation of a virtual library about the treasures of Athos, no one could imagine how relevant this would become.

“In today’s situation, VR Pilgrim is the only opportunity to see the holy places with your own eyes,” the Archimandrite adds.

In the case of Mt. Athos, which only accepts male pilgrims as visitors, this is indeed a rare chance for females to view the stunning monastic buildings constructed atop the mountainous crags of the peninsula.

The Meteora monasteries, located northwest of the town of Kalabaka, were built atop the rocks of Meteora, rising more than 600 meters (1,968 feet) into the sky. The Greek word Meteora means “suspended in the air,” which beautifully describes the location of the Byzantine-era monasteries, which also house myriad priceless artifacts and wall paintings.

Today, six monasteries are operated by a small number of monks and nuns who continue to reside on Meteora. In 1988, the Meteora monasteries were included on the UNESCO World Heritage List.

Mount Athos, with its spectacular views over the sea in northeastern Greece, remains the spiritual capital of the Orthodox Christian world.

Dating from 900 AD, there are twenty monasteries there, housing some 2,000 monks, in what is considered the oldest continuously-inhabited monastic community in the world.

The religious men of Mt. Athos continue to live in a way that has barely changed in over 1,200 years, with some monks even choosing to spend their lives in contemplation in isolated huts perched atop the mountains.

Prayer and work are the main activities of the monks, with most religious services taking place at nighttime.

With its spectacular setting and magnificent views, the monasteries atop Mount Athos are also listed on UNESCO’s World Heritage list.

In creating virtual tours of Greek monasteries, VR Pilgrim describes itself as “The first aрр in the world that makes it possible for anyone to touch, virtually, the greatest shrines and relics of the Christian world, filmed in the corners of our planet that are unique and sometimes off-limits to most travelers.”

The VR Pilgrim app is available for download at Google Play and the App Store.