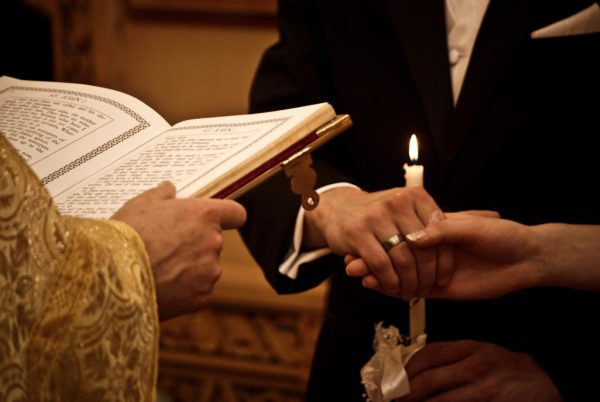 Few things differ more clearly between Eastern and Western Christianity than the service of Holy Matrimony. There are things found in Western Christian Marriage ceremonies that cannot be found in the East just as there are things in the East that cannot be found in the West. In many languages of the Eastern Churches, the service for a marriage is referred to as the “Crowning” – named for the central act within the ceremony – the crowning of the bride and groom. However nothing separates the marriage ceremonies of East and West like the place of marriage vows: there are no wedding vows in an Orthodox wedding.

Those unfamiliar with Orthodox weddings are often taken aback by this fact – how can there be a wedding without vows? How can a couple actually be married if they make no promises? I have heard it observed wryly that in Orthodoxy, we do not require the bride and groom to perjure themselves on their wedding day! But the absence of vows points to more than ceremonial differences – the theology of marriage differs greatly – and it is a difference worth pondering.

In the Orthodox wedding the couple is first “bethrothed” with the exchange of rings. Led into the center of the Church, the priest offers prayers. In the course of those prayers, in something of an “epiclesis” (the calling down of the Holy Spirit to accomplish a particular purpose – present in all the sacraments of the Church), the priest asks God to be present; to bless the marriage; to preserve their bed unassailed; to give them the dew of heaven; to fill their houses with every good thing; to send down heavenly grace to bless, preserve and remember the bride and groom; and just prior to the crowning:

stretch out now also Thy hand from Thy holy dwelling‑place, and unite this Thy servant, N. and this Thy handmaiden, N.; for by Thee is the husband joined unto the wife. Unite them in one mind; wed them into one flesh, granting to them the fruit of the body and the procreation of fair children.

And then the priest crowns the couple (three times), saying each time: “Crown them with glory and honor!” (see Psalm 8:5)

In contrast, the marriage in the West finds its focus within the exchange of vows. “Do you…take this woman…to have and to hold, to love and to cherish…etc. as long as you both shall live?” I was taught, when I was an Anglican, that the “ministers” of the sacrament of marriage are the couple themselves. The priest witnesses, and prays for God’s blessing.

This centerpiece of marriage in the West has been a subject of great creativity in the last number of decades. “Writing your own vows,” has been an essential undertaking for many couples (and probably the source of more than a little angst). I have seen examples of beauty and examples of triteness beyond description.

The role of vows in Western marriage is also bearing some very strange fruit.

Our culture, following the logic of vows, views marriage as a contract between two people. Specific promises concerning performance (and non-performance) are offered. These details of the contract are “witnessed” (for that is the language of the license itself). A Church offers a blessing, but the essential nature of a civil ceremony and a religious ceremony are found only in music and the trappings, not in the ceremony itself. I have often wondered whether the state would declare Orthodox marriages to be null and void if it were to learn that there are no promises made or accepted.

This contract view of marriage has become problematic in the current civil discussions of same-sex marriages. If marriage is a contract, how can anything be an essential problem to any two people entering such a contract? If they are both willing to acknowledge the requests and requirements expected of them, how can anyone say they have no right to have such an arrangement? Marriage as contract is wide-open.

However, there is no contract in an Orthodox marriage. A couple present themselves to God within the Church and it is there that the sacrament occurs. The power of God comes upon the lives of a man and a woman and unites them in one mind and weds them in one flesh. The sacrament is a union, not a contract.

Not all people can be united. St. Paul warns of false or corrupted unions:

Do you not know that your bodies are members of Christ? Shall I then take the members of Christ and make them members of a harlot? Certainly not! Or do you not know that he who is joined to a harlot is one body with her? For “the two,” He says, “shall become one flesh.” But he who is joined to the Lord is one spirit with Him. Flee sexual immorality. Every sin that a man does is outside the body, but he who commits sexual immorality sins against his own body. Or do you not know that your body is the temple of the Holy Spirit who is in you, whom you have from God, and you are not your own? For you were bought at a price; therefore glorify God in your body and in your spirit, which are God’s.  (1Co 6:15-20 NKJ)

Paul moves seamlessly in this short exhortation between sexual union with a harlot and spiritual union with Christ. Clearly, for St. Paul, union is union. But in neither case is union a contract.

It would seem obvious that if marriage is a contract, then almost any contract is theoretically possible (perhaps much less than advisable, but not impossible). However, in the Orthodox understanding, the union of a marriage is fulfilled most commonly in procreation. It is fulfilled mystically in the “one flesh” (of which procreation is but one example). Not every marriage union is blessed with children, but such a fulfillment is considered normative. Couples beyond the age of conception have certainly conceived children within Orthodox tradition (Abraham and Sarah, Joachim and Anna, etc.). But attempts to create a union out of what cannot be a union, nor  bears even the most remotepossibility of union, are outside the bounds of matrimony. There is no denying that relationships, even contracts might be created, but a union is something entirely different. St. Paul does not use the argument of union to oppose same sex relationships – for union there is not possible. His objections (and those of the Church) rest on other grounds.

In some ways, it would make sense for Orthodoxy to object to all marriage in the Western model because of its contractual basis. However, such objections have never been made. As civil societies continue to experiment with new definitions, however, such objections might be worth considering. The objection would not be an effort to declare marriage as a contract to be null and void, but simply woefully misunderstood.

Pondering all of this, I once wondered if we should stop using the word “sex” to describe what a man and woman have with one another. Instead, I wondered how it would be if we called that activity “marriage”? “Have you had marriage with that girl?” Perhaps such a shift in language would better help people understand the nature of sexual activity.

Words and ceremonies matter, particularly when their nature and the context changes. The language and concept of contract served the West for many centuries. I believe that it created an overly legal understanding of a relationship that would have been better described in organic terms. Today, contract has triumphed over organic objections and the language (and ceremony) seem to be coming up short.

The language of the understanding of marriage within the Eastern model might suggest possible ways for other Christians to think as well. It certainly behooves Orthodox Christians to ponder deeply the substance of the Tradition that is theirs. It would make good sense if Orthodox Christians were to rid themselves of the confusion of contractual imagery that might have been inadvertently absorbed.

Crown them, O Lord, with glory and honor!

The Gospel of Progress – and the New Jerusalem

American fans of Monty Python will be familiar with the opening lines of William Blake’s poem, “Jerusalem” (and…

Give Thanks At All Times

People flee from the cross in their life, thinking that it is…