Оn the Sanctity of Marriage

Let us join in prayer that the people of faith across the states of New York and New Jersey will continue to stand fast in the divinely revealed truth of what marriage means. And let us by our example witness to the life of chastity to which every human person, made in the image and likeness of God, is called.
Bishop Mefody of Campanie (+1974) | 28 June 2011

June 24, 2011 Feast of the Nativity of Saint John the Baptist

Beloved Fathers and Mothers, Brothers and Sisters in the Lord:
Christ is in our midst! – He is and ever shall be!

On this very day, we have witnessed the successful efforts of public officials in the State of New York to legally re-define the meaning of marriage to include unions between two persons of the same gender. It is important for us, as Christians of the Orthodox Church, preserving the Tradition of teaching the truth handed down by the Lord Himself, “the faith which was once for all delivered to the Saints” (Jude 3), to re-affirm the meaning of marriage given to us in His Sacred Scripture.

In the document, Affirmations on Marriage, Family, Sexuality, and the Sanctify of Life, written and adopted by the Holy Synod of Bishops of the Orthodox Church in America in 1992, we read (in part) the following summary of the teaching of our Faith on this matter: 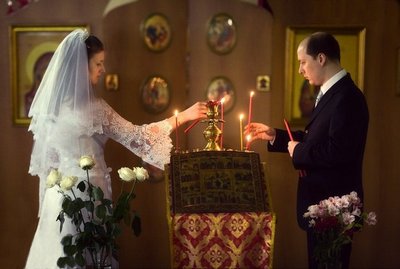 1) God wills that men and women marry, becoming husbands and wives. He commands them to increase and multiply in the procreation of children, being joined into “one flesh” by His divine grace and love. He wills that human beings live within families (Genesis 1:27; 2:21-24; Orthodox Marriage Service).

2) The Lord went even further to declare that people who look at others to lust after them in their hearts have “committed adultery” (cf. Matthew 5:27-30).

3) Christ’s apostles repeat the teachings of their Master, likening the unique marriage between one man and one woman to the union between Christ and His Church which they experience as the Lord’s very body and His bride (Ephesians 5:21-33; 2 Corinthians 11:2).

4) Marriage and family life are to be defended and protected against every open and subtle attack and ridicule.

5) Sexual intercourse is to be protected as a sacred expression of love within the community of heterosexual monogamous marriage in which alone it can be that for which God has given it to human beings for their sanctification.

As children of God, we are called to conform our sexual behavior to the commandments of Christ. As Christians, whether single or married, we are called to a life of chastity, pleasing to the Lord. This means struggling against those passions that incline us to “fall short of the glory of God” (Romans 3:23) – fornication, homosexual activity, or adultery. A heterosexual person has to overcome his or her inclination toward multiple partners of the opposite sex outside of the blessed union of marriage; a homosexual person has to overcome his or her inclination toward others of the same sex. We are all called to live our lives according to the will of God and thereby partake of the way of salvation.

No matter what the prevailing pressure of the culture or the legislation of the state may proclaim, the timeless teaching of the Church echoes the rule of marriage revealed to us by the Lord, written in the Scripture, and re-affirmed by the wisdom and examples of the Saints. Gay marriage or any other unblessed sexual activity is not the love that the Lord extols. Because “we have the mind of Christ” (1 Cor. 2:16), no matter what the government or society may say, like St. Peter and the Apostles, “we must obey God rather than men” (Acts 5:29). We need not be afraid to stand in opposition to prevailing trends, as the early Christians stood bravely and boldy, upholding heterosexual monogamous marriage in the non-Christian empire of their time.

Having said this, we must never forget the Lord’s greatest commandment of love, which includes, after loving God above all else, the imperative, “You shall love your neighbor as yourself” (Mark 12:31). This means we must never condemn anyone, but reach out to everyone with the living, healing, saving love of God in Christ Jesus. It means to walk in truth toward all, to do what is right for all, and to affirm what is good and holy on behalf of all.

Let us bear witness to the truth taught by Our Lord, and lived by His Saints, in our daily conversations with our families, our fellow Christians, our neighbors and co-workers. Let us teach the Orthodox Christian vision of marriage, as a path to salvation shared by husband and wife, to our children, godchildren, and all those who come under our care as parents, godparents, pastors, and Christian educators.

Let us join in prayer that the people of faith across the states of New York and New Jersey will continue to stand fast in the divinely revealed truth of what marriage means. And let us by our example witness to the life of chastity to which every human person, made in the image and likeness of God, is called.

With my humble prayers and love in Christ, I remain

Devotedly yours in His service,

Great Saturday: Near the Sepulchre of the Son of God and the Son of Man

Brothers, many of us have probably stood near the grave of a beloved one, a relative or a…

What Will One Say And Feel While Standing Near the Holy Sepulchre?

Hustle and bustle goes quiet near any grave, even a human one. Every grave speaks by its silence.…

Thomas Sunday is a day of reflection about doubts. First of all, one should not be particularly surprised…