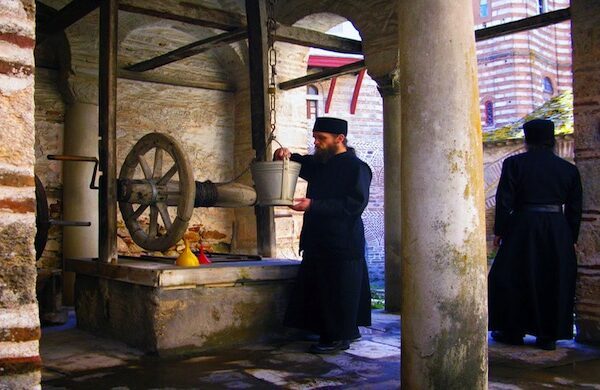 Now a new generation is born with Jesus Christ as its spiritual founder. The purpose of this generation is to give its freedom to God through obedience, and, moreover, obedience not due to coercion or obligation but to love. ‘Who shall separate us from the love of Christ? Shall trouble or hardship or persecution or famine or nakedness or danger or the sword?’ (Rom. 8, 35). Saint Paul submits to whatever happens, so that he won’t be separated from the love of Christ. This shows that the essence of obedience is love. Within this new, grace-filled state, the children of obedience and love attain the boundaries of true freedom. Freedom from egotism, from the passions, from fear, from the devil, from death. After Saint Anthony had practiced obedience over many years, he attained the state of perfect freedom, love and liberation from the passions: ‘I no longer fear God; I love Him. For love casts out fear’. Love is also the essence of true freedom.

Christians reach this blessed state after great violence which they inflict voluntarily on their egotistical will, in order to submit voluntarily to the holy will of God. As the Lord says in the Holy Gospel: ‘the kingdom of heaven has suffered violence and the violent take it by force’ (Matth. 11, 12). The experience of the saints can be summed up as: ‘Give blood, receive spirit’. With the blood of your heart which you shed, you’re purified of the passions. Then you’re able to receive the grace of the Holy Spirit. ‘For where the Spirit of the Lord is, there is freedom’ (2 Cor. 3, 17).

Christians who are striving realize that freedom is them living in God and God living in them. For unbelievers, freedom resides in egotism: ‘I’m free when I’m doing what I want’. For Christians freedom resides in love and in God: ‘I’m free when I’m doing what God wants. As Saint Symeon of Thessaloniki says: ‘And then people’s will and independence will come into play, when they willingly want the will of the Creator’ (Epistle to the Lavriotes). Freedom is grace, a gift. The struggle of the faithful is to contribute and cooperate, to accept and not react against divine Grace.

Freedom through obedience. This seems paradoxical and contradictory. So does the mystery of the Holy Trinity. But in both instances, they’re true precisely because they’re contradictory. They take us to another condition of being, that of the future age. If they weren’t contradictory, they’d leave us in the same situation in which we find ourselves now, in the present age. ‘If the nous is free of all its enemies and keeps the sabbath [i.e. refrains from working], it is in another, new age where it reflects on new and imperishable things’ (Saint Isaiah the Anchorite).

Christ’s slaves become emancipated. Christ liberates all those who become His slaves. When people want to become slaves of Christ, obedient to Him, He makes them His friends. He brings them into His kingdom. ‘You are my friends. I no longer call you servants (Jn. 15, 14). In the Church, people serve and obey Christ and so they become free. ‘The servant of God is baptized in the name of the Father, the Son and the Holy Spirit . ‘The servant of God is given communion’. Through this servitude, Christians become the children of the ‘blessed Kingdom of the Father and of the Son and of the Holy Spirit’. This is the Kingdom which has freedom and love at its core.

Christians enjoy this freedom particularly at Holy Communion and in worship. The most venerable Elder Afxentios, a monk of our monastery who fell asleep in the Lord last March, entreated us not to hinder him from taking part in the services, even though he was exhausted with age and was blind, to boot. He used to say: ‘I sense freedom in church’. At the Divine Liturgy and the other services, we’re liberated from corruption, death and the devil; we’re transformed and made imperishable. ‘Now’ becomes ‘ever’, because we’re partaking in the Kingdom of God. This is real freedom.

With all its institutions, the Church helps its children on the upward path towards freedom in Christ.

The more that people are cleansed of the passions, the greater their capacity for real communion with God…

On the Spiritual Struggle

How can a faithful person be delivered from the old fallen person?