Of Vineyards and Cornerstones 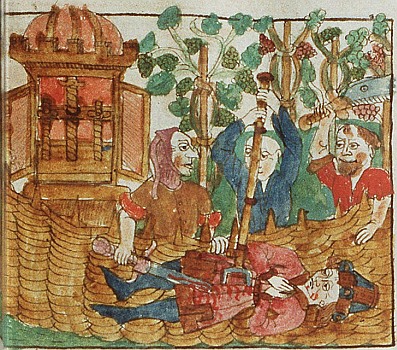 There probably are not many vineyards close to Abilene, but we can all still understand what Jesus Christ was talking about in today’s gospel reading.  A vineyard is a place where grapes are grown.  The Lord told a parable about a landowner who had workers take care of his vineyard.  When the grapes were ready, he wanted the fruit and sent servants to get it.  But things went south from there.  The workers beat and killed whomever he sent.  And even when the landowner sent his own son, they killed him also.

Of course, the Lord was talking about the religious and political leaders who so often rejected and killed the prophets whom God had sent them in the Old Testament.  And that’s also how they responded to the Son of God, refusing to accept His teachings and handing him over to the Romans for death on a cross.  Christ spoke this parable against the high priests and Pharisees, and they knew it.  Salvation did not come to the world through their hypocritical distortion of the law of Moses or through ritual sacrifices in the Temple.  Instead, the One whom they rejected became the chief corner stone, the very foundation of a new kingdom in which Jew, Gentile, male, female, rich, poor, young, old, slave, and free would know the blessing of life eternal through the mercy and grace of Jesus Christ.  Yes, this is the Lord’s doing and it is marvelous in our eyes.

St. Peter wrote in his epistle that Christians are “living stones…being built up a spiritual house, a holy priesthood, to offer up spiritual sacrifices acceptable to God through Jesus Christ.”  (1 Peter 2:4-5) In other words, as the Church we are collectively the temple of God by the power of the Holy Spirit. We are “a chosen generation, a royal priesthood, a holy nation.”  (1 Peter 2:9) The Jews of old had a law and the teachings of the prophets, but we are members of Christ’s own Body; we are branches of His vine; we share His own Body and Blood; and He lives in our hearts.

We have to be careful, however, not to fall into the temptation of condemning the Pharisees and Sadducees for their blindness and simply congratulating ourselves for believing in the Gospel.  In other words, there’s more going on here than thinking “bad for them, good for us. “  For all too often, we are very much like those who rejected our Lord.  No, we don’t deny that He is the Son of God.  We do not seek to kill Him or say that He is evil.  But in much of our lives, we do not truly accept Him as the cornerstone, as the very foundation of who we are as men and women, husbands and wives, or boys and girls.

So instead of focusing on how the Jewish leaders rejected the Messiah two thousand years ago, let’s think about how we reject Him today.  To whom much is given, much is expected.  We have been given far more than even the most righteous person of the Old Testament and God expects much more of us. When Christ interpreted the Old Testament law to His disciples in the Sermon on the Mount, He demanded that they be more righteous than the religious leaders of their day.  And since those fellows were sticklers for following all the details of the law and interpreting them very strictly, I bet that the disciples weren’t happy to hear that.  But the Lord wasn’t interested in that kind of outward righteousness.  Instead, He went for the heart, for the depths of who they were as people.  “Blessed are the pure in heart for they shall see God.”

Jesus Christ told them that it wasn’t enough to obey the law, “You shall not kill.”  Instead, His followers needed to root out the cause of murder from their hearts.  They had to give up anger, insults, and hatred.   It wasn’t enough for them not to cheat on their spouses.  They were to eliminate lust from their hearts.  It wasn’t enough for them to demand “an eye for an eye and tooth for a tooth” from those who wronged them.  They were to turn the other check, to love, to forgive, to be like God in showing mercy to the just and the unjust.   In fact, they were to be perfect as their Father in heaven is perfect.

The point is that, if we view our faith as simply a set of laws to obey, we will end up rejecting Jesus Christ as the corner stone of our lives.   For our Savior is not merely the teacher of a code of conduct, He’s the foundation of our life.  He goes to the heart.  We are His temple and our life is in Him.  And whenever we refuse to accept the new and glorious life that He has given us, we reject Him and we turn away from our true selves and our only hope.  When that happens, we are just like a building that isn’t properly grounded on a solid foundation.  We are in a very dangerous situation.  For apart from the mercy of Christ, we Gentiles don’t have a leg to stand on, not even the Old Testament law.  We would be worshiping rocks, trees, and the seasons of the year if it were not for our Savior who fulfilled the promises to Abraham to include us all.

You see, something or someone has to be the foundation of our life.  If it’s not our Lord, we will make up a false god.  The character of our hearts and souls will be determined by something or someone.  We will be a temple of one kind or another.  But if we want to be different from those vineyard workers who rejected and killed the landowner’s servants and even his son, our life—our identity—must be firmly, solidly grounded on the one true cornerstone.  Our hearts must become pure temples for the one true God and we must turn away from the idols that have worked their way into our lives.

That’s why we don’t talk about the Christian life in the Orthodox Church as a simple set of rules, for it’s easy to obey a few laws and then find loopholes to get around what you don’t want to do.  But Christ is not the cornerstone of that kind of life.  Instead, He is infinitely holy and righteous, and He brings us into the brilliant light of the Kingdom of God where there is no room for any thought, word, or deed that does not reflect His glory.  To accept Him as the cornerstone of our lives is to be engaged in the eternal process of sharing in His life and light, of being transformed by His holiness to the depths of our hearts.

So we must constantly purify our hearts, minds, and souls by removing from our lives every thought, word, and deed that isn’t holy, that doesn’t belong in a temple.  Anything that doesn’t fit squarely on the foundation of Jesus Christ has no place in us.  As we pray, fast, forgive those who wrong us, help the poor, guard our thoughts, and fight our passions, we will gain the clarity that we need to sort out the holy from the unholy in hearts and lives.  And as we are nourished by our Lord’s Body and Blood in the Holy Eucharist and receive His forgiveness through Confession, we will find new strength to embody the righteousness of Christ as we go through each day.  Remember that our goal is not to follow a law, but to become like an iron in the fire, to shine visibly with the radiant light of heaven, to convey the unspeakable beauty of God in an often dark and ugly world.

As we enter into the offering of the Eucharist, let us now truly lift up our hearts and commend ourselves, one another, and all our life unto Christ our God.  And as we begin a new week, let us actually live that way as we go through our daily routines and shine forth with the glory of the true temple built squarely upon the one true foundation, the cornerstone, our Lord, God, and Savior Jesus Christ.  To do anything less is to reject Him just as surely as did the corrupt religious leaders of old.