So the Orthodox Church calls us to a demanding life, but she is always full of compassion for those who fail in it and seek forgiveness. No member of the Church (on earth) completely fulfills what Orthodoxy asks him to be, but each member who tries to fulfill it becomes more than he would have been. Some come into the Church with marriages already broken, lives already wrecked. Our Lord does not say, "Come unto me all you that are already perfect," but "Come unto me all you that labor and are heavy laden."
Archpriest Paul Yerger | 24 October 2008

This letter speaks to a concern expressed to me recently, which I believe others have felt also.

The Orthodox Church asks more of its members than most churches today, not only in terms of outward things like fasting and attendance at services, but in terms of agreement in doctrine and fidelity in marriage and general morality. Furthermore, members of a small mission church such as ours necessarily feel a greater responsibility in terms of time, labor, and money than members of large well-established parishes. It’s harder to say, “Let George do it” when there are so few Georges. Finally, most Americans, even if they admire Orthodox doctrine, feel a “culture shock” in coming to a church still somewhat “Old World” in flavor. Anyway, this person said in effect that there was a lot he admired about Orthodoxy and he respected us for what we’re doing, but that he felt unable to live up to the kind of commitment that seemed to be called for in our Church. 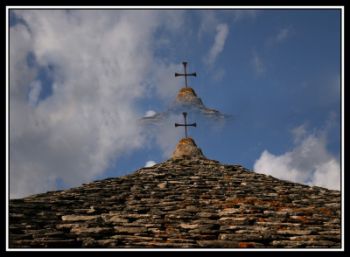 First, let me say that I appreciate the honesty of this. Our Lord says that whoever wants to build a tower must first count the cost, lest he undertake something he cannot finish (Luke 14:28). To make a commitment lightly and then abandon it is spiritually harmful. This is why Archbishop Dmitri prescribes a one-year catechumenate (learning period) for those wishing to join our church. We’d like to have more members, so it’s tempting to say, “Oh, come on anyway and just participate when you feel like it.” But Jesus does not do this. When the rich young man turns away, unwilling to do what Our Lord asks, He does not chase after him to strike a compromise. Yet, on the other hand when St. Peter, having undertaken to follow Christ and having been given the greatest responsibility in the Church, lost his courage in the crunch and denied even knowing Christ, Our Lord forgave him, set him back in his job, and told him to feed the sheep. (St. John 21:17).

So there is a difference between being unwilling to commit our lives to the Lord, and being unable to fulfill our commitment. “The spirit is willing but the flesh is weak” as St. Paul puts it. The Orthodox approach to moral theology is to ask the maximum from each believer, and fall back on the mercy of God as we fail to fulfill that maximum, not to define conditions and exceptions to lessen the severity of Christ’s call. So the Orthodox Church calls us to a demanding life, but she is always full of compassion for those who fail in it and seek forgiveness. No member of the Church (on earth) completely fulfills what Orthodoxy asks him to be, but each member who tries to fulfill it becomes more than he would have been. Some come into the Church with marriages already broken, lives already wrecked. Our Lord does not say, “Come unto me all you that are already perfect,” but “Come unto me all you that labor and are heavy laden.” When I became convinced of the truth of Orthodox Christianity, I knew that to become Orthodox, I would have to give up my home and my job. As I contemplated that decision, a priest reminded me, “humanly speaking it is impossible, but with God all things are possible.” I certainly have fallen far short of being all that the Orthodox Church asks me to be. But I don’t regret the decision to try.