On Russia and Russianness: There is Continuity Between the Russian and the Soviet – a View from the West 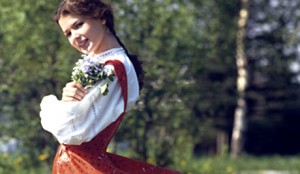 In his interview to the Voice of Russia Dr Jeffrey Murer, an expert in identity politics from the University of St Andrews, Scotland, shares his thoughts about Russia and the mysterious Russian soul. The academic discusses what Russia stands for in the twenty first century, how the modern concept of Russianness is different from the Soviet ‘Self’, what role Russian language and Orthodox church play in the formation of Russian identity, and the how the Cold War mentality is still entrenched in Russian and American politics.

To begin with, I think that the notion of Russian identity during the Soviet years has always been a rather slippery conception. The distinction between what was Russian and what was Soviet has often been blurred. Some might argue that the core of the Soviet identity was solidified in the experience of the Great Patriotic War, and yet it was a Russian war. It was a war fought by Russians for everything that ‘Russia’ stood for. In this respect, the Great Patriotic War became a symbol of ‘prolitarianized Russianness’ – a new identity that was horizontally distributed to all of the Russian peoples. From this perspective, Soviet identity was very open, generous, and multicultural. In the post-Soviet times, this openness was transferred to the new Russian identity through the discourse of ‘Rodina’ [home-country]. So, I think that there is no sharp distinction between the Russian and the Soviet. There is a continuity between the two.

Voice of Russia: Given that Russia is a multicultural state, what are the main factors that influence the construction of the modern Russian ‘Self’? Would you say that Russian language and Christian religion are the primary constituents of Russian identity?

This is a difficult question because this is what is being constantly debated and fought over. One the one hand, the notion of Russianness as a ‘Rodina’ can hold multiple languages. Being and feeling oneself as Russian does not prevent one from speaking a Siberian, Fino-Ugoric, or Altaic language. On the other hand, however, I think that Russian language is extraordinarily important for the very concept of Russianness. Quite obviously, Russian language separates Russians from Finns, Balts, Lithuanians, and Ukrainians. Indeed, we can now witness language politics in motion in Ukraine, where the language you speak quite literally denotes your national belongingness. In this respect, all so often Russian-speakers are brought into the conception of Russianness simply on the language basis.

Language politics has also been a significant issue during the first Chechen war. Unlike other regions around Chechnya, most Chechens speak their native language, not Russian. In this sense, language was the one of the fundamentals around which the notion of a distinct Chechen nation was built as opposed to the Russian nation.

As for religion, I think that in the past decade religion has become an increasingly significant part of Russian identity. It would not be inappropriate to say that today’s government tries to bring the state and the church to a closer partnership. It is a smart move on the part of the Kremlin because close ties with the church always contribute to the legitimacy of the government. This is not to say, however, that the governmental apparatus in Russia lacks such legitimacy without the church, but that being aligned with the Orthodox church the political establishment is stronger socially and politically. Crucially, while this is a smart move, it problematizes the belongingness of people with other religious affiliations to the whole notion of Russianness. This is the challenge that Russia is yet to address through its new multicultural policies.

Voice of Russia: In your opinion, how does Russian identity influence its foreign policy decisions? Do you think the Russian leaders got rid of the Cold War mentality of which they are so often accused by the US political establishment?

Well, what is interesting is that the same accusation can easily be made against the US political elites – sometimes excluding the Obama Administration, but sometimes even including the Obama Administration. There have been a lot of provocations by American political elites that have enflamed essentially ‘Russian’ political sensibilities. The deafness of the White House during the Bush Administration regarding Russian concerns about the placement of radar stations, or even more explicitly, missile bases in Poland and Czech Republic, can only be seen by Russia as a statement of a Cold War-like aggression. So there is still the background of the Cold War in both countries. In part, I would attribute this to the fact that the majority of the political elites in the US and Russia were trained during the Cold War – they were not taught to think differently. Condoleezza Rice, for instance, is one of those ‘Cold War warriors’.

Voice of Russia: In this light, how do you see Russian-American relations develop in the next decade?

I think that the current conflict in Syria is the one of the best examples of how both states are being caught between the post-Cold War mindset and, perhaps, not yet being completely open to this mentality. In this respect, I must say, the fault lies with the Americans. Without judging the correctness of Russian political stance toward Syria, one has to admit that there are substantial Russian interests there, not the least being that Syria provides Russian navy with a direct access to the Mediterranean. So, it is only rational for Russia to fight for its interests in the region. Whatever comes out from this conflict, Russia wants to minimize the damage to its assets in Syria. The fact that the US politicians are so upset about Russian stance on Syria is the situation when the pot is calling the kettle black. The way the US managed its interests in Egypt without being attentive to other states who were suggesting that the US support for the Mubarak regime was keeping an authoritarian power in place. Likewise, the position that the US took in Libya was largely ignorant of the Russian concerns on the issue. Regarding Russian politics in Syria, the US is just upset that they cannot do whatever it is that they want to do. I think that to a large extent this goes along with the American fantasy of being the only superpower in the post-Cold War world. This might be an appropriate assessment in terms of military capability since the US indeed has such military power that few modern states have. However, at the same time, I would say that the US does not adequately assess the reality of the modern multipolar world where Europe, China, Brazil, India, and Russia all have something to say.

Voice of Russia: It is interesting how during our interview you sometimes distinguish between Moscow and Russia. Is it something you do consciously?

It is interesting that you picked up on this, maybe I was doing it unconsciously, but to put it consciously, I remember saying to my colleagues in the 1990s that one cannot understand Russia by going to Moscow. Even being in Volgograd one feels something completely different than what one feels being in Moscow, let alone what is feels like being in Ekaterinburg or Vladivostok. In this respect, there is an interesting parallel that can be made between Moscow and Washington. Much like Moscow, Washington can be its own little hermetically sealed bubble. All too often Washington does not reflect Americanness in its completeness. The same holds for Moscow. To understand the Russian soul, to apperceive what is Russianness, one has to go outside Moscow.