On the Day of Uncovering of the Relics of St. Sergius of Radonezh, Primates of Russian and Serbian Orthodox Churches celebrate Divine Liturgy in Cathedral Square in the St. Sergius Laura of the Trinity 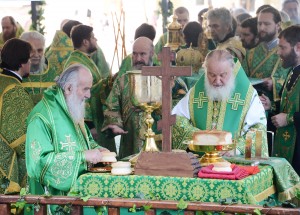 It was for the first time in the history of the Laura that the liturgy was celebrated in the cathedral square.

The primates of the Russian and Serbian Churches were assisted by a great assembly of bishops, priests and monks in holy order, among them Metropolitan Amfilohie of Montenegro and the Seaside, Bishop Longin of Central and Western America, Bishops Irinej of Bac, Bishop Teodosije of Raska-Prizren and other members of the official delegation of the Serbian Orthodox Church.

The service was attended, among others, by A. Beglov, presidential envoy for the Russian Federation Central Region, S. Stepashin, chairman of the Russian Federation Audit Chamber and chairman of the Imperial Orthodox Palestinian Society, Yu. Chaika, Prosecutor General of Russia, O. Rozhnov, as well as Moscow regional officials and participants of the 6th International Congress of the Fellowship of Orthodox Youth.

After the liturgy the two patriarchs celebrated a thanksgiving at the venerated Icon of St. Sergius of Radonezh in the cathedral square.

After the thanksgiving, Patriarch Kirill greeted Patriarch Irinej, who said in response that it was a special honour for him to be invited to the Day of St. Sergius, one of the central feasts of the Russian Church.

‘St. Sergius was fearful for all enemies, both invisible, who tried to escape the prayers he lifted up in solitude, and visible whom he drove away from the Russian land by the blessing he gave to the Prince Dimitry Donskoy. As the father of the Russian land, he deserves such veneration as no other saint does…

‘It is very good that here, in the Laura of St. Sergius, there are students from our Serbian Church. Only here can they receive a unique experience of life in the full-flowing and powerful Church which cherishes the long-standing order and traditions inherent in our Slavic world, while European countries become ever more godless. A while longer and Orthodoxy will have not to live but survive there’.

Patriarch Kirill addressed numerous pilgrims, speaking from the balcony of the patriarchal chambers, saying in particular,

‘I am delighted to see you in such a great number. When we pray together in the Saint’s Laura, we become stronger. Each becomes stronger feeling the support coming from the prayers of those standing at his or her side. The more we are standing side by side around God’s altar the stronger we are spiritually. That is why the soul of an Orthodox Christian is so longing for pilgrimage, for participation in important celebrations, because they unite the Church around the Body and Blood of Christ. These celebrations offer a great opportunity to be part of our common life.

During the fraternal repast, Bishop Zinovy of Elista and Kalmykia was awarded the Order of St. Sergius of Radonezh, Degree II, in acknowledgement of his zealous archpastoral work and on the occasion of the 35thanniversary of his ordination and 65th birthday.