Metropolitan Hilarion’s Sermon on the Day of St. Sergius of Radonezh 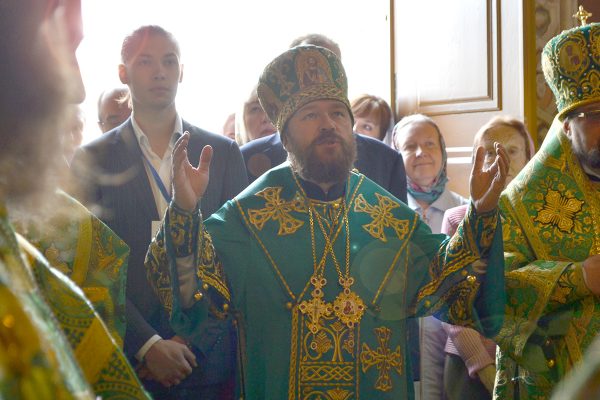 On July 18, 2019, the commemoration day of St. Sergius of Radonezh the Miracle Worker of All Rus’, Metropolitan Hilarion of Volokolamsk, head of the Moscow Patriarchate department for external church relations, celebrated the Divine Liturgy at the St. Sergius Laura Monastery of the Holy Trinity’s church of the Descent of the Holy Spirit. The archpastor was assisted by Archbishop Theopanus of Korea, Bishop Alexy of Galich and Makariev and brethren of the monastery.

After the Prayer of Fervent Supplication, His Eminence lifted up a prayer for peace in Ukraine.

In his sermon after the service, Metropolitan Hilarion greeted the congregation on the commemoration day of ‘our Venerable and God-Bearing Father Sergius, the Abbot of Radonezh and Miracle-Worker of All Russia’ and said that ‘the day of his sacred memory and our assembly in the monastery founded by him us reflect on the meaning of monastic life.

‘When the monastic movement was born in the Church, those who took monastic vows saw in monastic life an opportunity to become like angels who do not enter into marriage, who are not burdened with temporal cares and dispense their attention from numerous earthly concerns. They are focused on the fulfilment of the will of God, and in it they see their principal service and vocation. And when a person takes monastic vows, in the first place he withholds his human will but commits it wholly to the will of God’ he said.

‘The greatest example for every monk is the Lord Jesus Christ. He was not an angel; He was a human being, like we are, but He was devoid of sin. And He fully subjected His human will to the Divine will. And monks are those who learn to subject their will to God’s will’, which we learn, he said, from Holy Scriptures, Epistles of Ss Peter and Paul and St. John as well as other apostles.

However, along with books, even sacred ones, he continued, we should listen to our inner voice, the voice of our conscience, because it is through the voice of conscience that God speaks to us. So, monks and those who are called always to fulfil the will of God and never to bend to the sinful human will.

Speaking about St. Sergius as an ideal of monastic life, His Eminence said that St. Sergius’ spirit inspired thousands of monks for many centuries. ‘And this inspiration, which he installed in the Russian monasticism, lives in this holy cloister to this day and will dwell here to the end of time’.

‘We remember quite a recent time’, he continued, ‘the epoch of persecution of the Church in the 20thcentury, when the authorities did not only forbid to build monasteries but also to accept monks in the existing ones. There were only 20 monasteries in the whole of the Russian Orthodox Church at that time, while now there are almost 1000 monasteries in it. Whence come the people who have filled these cloisters? Indeed, they are mostly young people, men and women, who have come to dedicate themselves to monastic life. There can be only one answer to this question – they have been called by the Lord to walk a hard and narrow way that few can cope with. And we believe that monastic life will never weaken in this sacred Laura and will develop in our Church through the intercession of our venerable and God-bearing father Sergius and honourable fathers who have shown forth in the feat on monastic life. Amen’.