On January 19, 2014, Metropolitan Hilarion of Volokolamsk, head of the Moscow Patriarchate’s department for external church relations, celebrated the Divine Liturgy at St. George’s of the Orthodox Church of Antioch in Mexico City. Among his concelebrants were Archbishop Kyrill of San Francisco and Western Americas (ROCOR), Archbishop Justinian of Naro-Fominsk, administrator of the Patriarchal Parishes in the USA, Archbishop Alexis of Mexico (Orthodox Church in America), Bishop Ignatius of Caesarea, vicar of the Patriarchate of Antioch’s Metropolis of Mexico, and clergy of the Orthodox Churches of Antioch and Russia. 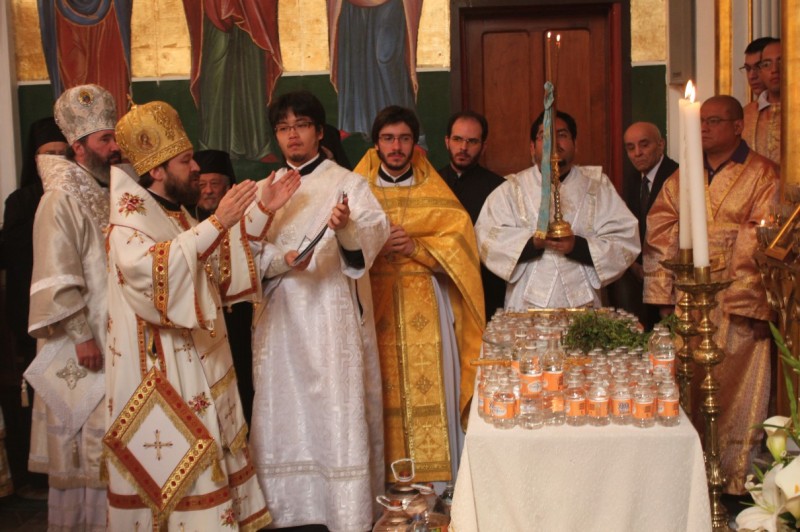 After the liturgy, Metropolitan Hilarion, assisted by the assembly of hierarchs, celebrated the rite of the Great Blessing of Waters.

Among the worshippers were hierarchs of the Patriarchate of Antioch including Metropolitan Anthony of Mexico, Central America, Venezuela and the Caribbean Island, Metropolitan Sergius of Chile, Metropolitan Damaskinos of Brazil, as well as the Russian Ambassador in Mexico E. Malayan.

Greeting the DECR chairman after the service, Metropolitan Anthony spoke about his archpastoral and church diplomatic ministry. He made a special mention of the fact that the high guest came from Russia, a county of “rich spirituality, great culture and history, whose people have played a great role in the world history, first of all, by their victory over Nazism almost seven decades ago”.

In his response, Metropolitan Hilarion, among other things, thanked Metropolitan Anthony for an opportunity for celebrating in a church of the Orthodox Church of Antioch, a martyr Church for which the faithful of the Russian Church pray with a special feeling. He stressed that for the first time in Mexico the Divine Liturgy was celebrated together by hierarchs of the Patriarchate of Antioch and the Patriarchate of Moscow including those of the Russian Church Outside Russia, and the Orthodox Church in America.

After that, His Eminence Hilarion delivered a homily about the meaning of the Holy Epiphany and the importance of the church and church Sacraments in the life of each believer.

That same day Metropolitan Hilarion and his party left for Moscow. He was seen off at the airport by Metropolitan Anthony, Metropolitan Sergius, Archbishop Justinian, Russian Ambassador E. Malayan, and Russian embassy counsellor I. Fedorov.