My fate brought me to Mexico City during Holy Week of 2019.  Feeling a bit guilty that I would be missing the divine services for the most critical period of the Church calendar, what a relief it was when after a short Google search, I uncovered not one, not two, but three separate Orthodox denominations operating in the various corners of the megalopolis that is Mexico City.  Mexico is a staunchly Catholic country, so the fact that the Orthodox can stake a claim of ground is nothing less than extraordinary.

Down a quiet tree-lined street, in the Colonia Cuauhtemoc just south of the Avenida de la Reforma, stands a white stucco Spanish California-style mission house.  It is unassuming and if you were not paying attention, you would miss the label on its iron gate: Monasterio de la Santisima Trinidad. The facade is made of white stucco buttressed by a central tower. The interior features traditional red clay glazed tiles, exposed wood beams, and earth tones.  The central patio holds the nave with a curving stairway leading to the choir station and the cells of the monks on the second floor.   The Church of the Holy Trinity, La Santisima Trinidad is home for the many Russians, Ukrainians, and former Soviets living in the city.  While it started as a church, it has now become a monastery comprised of two brethren, Father Christophoros, a convert from Armenian who served in Cyprus, and Father Arseny, a Mexican convert to Orthodoxy who serves as an iconographer as well as chanter.

However, the story of the monastery is entwined with the story of its Igoumen, Archimandrite Nektariy Haji-Petropoulos. His life’s journey with its many diversions, skips and stops, is a tale of traveling mercies that have culminated in the founding of this spiritual center, the heart of the Russian Orthodox presence in a country that once proved hostile to it.

“Our existence is a miracle, veritable proof of the Grace and Mercy of God, in as much as, despite all of our needs and challenges, we have become the heart, the soul, and the conscience of the Russian Orthodox community in Mexico,” Igoumen Archimandrite Nectariy exclaims.

Archimandrite Nektariy is in fact a Pontian Greek hailing from the land between the Caspian and Black Seas.  He spent his childhood in Sukhumi, Istanbul and Teheran. Then at age 12 he came to New York City with his father’s family.  It was from New York City where he was called again by his spiritual father, Bishop Pavlos (Ballestar) of Naziano of the Patriarchate of Constantinople to Mexico in his early teens.  Archimandrite Nektariy has served under so many jurisdictions in so many lands, it was hard for him to understand God’s will at first. Why had he been called to Mexico of all places?  As it turned out, Mexico City was just the place needed for a diaspora Greek priest-monk with Georgian/Soviet ties who could chant in Slavonic, Greek and Spanish (along with three other languages).

Actually, the idea to found a monastery to serve the Soviet Diaspora belonged to Bishop Pavlos.  Although he had served in the burgeoning Orthodox parishes in Mexico City, he wanted to establish a community of monasticism in line with Orthodox tradition.  His long-standing plans for such an endeavor were cut short when an ultra-radical, conservative Catholic military officer, suspicious of this foreign church, shot the Bishop on the steps of Saint Sophia Cathedral in 1984.  With the murder of his Bishop and spiritual father, Archimandrite Nektariy began preparations to start a monastery in Argentina in 1996. It would seem that the climate to start a religious order in Mexico was not right.  Yet, just as they were about to leave, Mexico received jurisdictional recognition and the newly enthroned Greek Metropolitan asked Father Nektariy to stay. 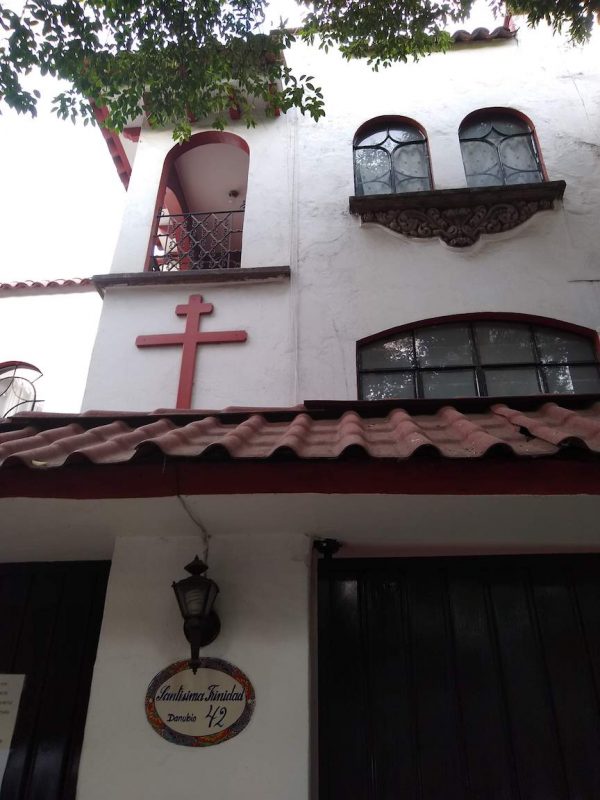 But this is just half of the story.  While there were Orthodox jurisdictions in Mexico, notably the Antiochian and the Greek, Father Nektariy had wanted to found a monastery according to the Old Julian Calendar, under the strictest of Orthodox traditions.  This arc of his life saw him returning to the US and aligning himself first with the Jerusalem Patriarchate in North America and then with the Holy Trinity Monastery in Jordanville, NY.  It was while he was in Jordanville that he was ordained a priest.  It was shortly after his ordination that led to the inauguration of the skete in Mexico, the first Russian Orthodox Church under the direction of His Eminence Archbishop Kyrill of San Francisco and Western America, along with the blessing of the Ever-memorable Metropolitan Laurus, First-Hierarch of the Russian Orthodox Church Outside of Russia and under the protection of the stavropegial men’s monastery in Jordanville, NY.  It would seem that the whole of Father Nektariy’s life had been leading up to this moment.  Indeed, at last he would find a fixed plot to end his spiritual search.  The first Old Calendar Russian-speaking community would be established in an unlikely place, Mexico.

Father Nektariy’s roundabout journey to Mexico City entailed a lifetime of travel to dozens of monasteries in the Holy Land, Greece, the Balkans, North America and a zig-zag course of allegiances with more than one Orthodox jurisdiction.  At last, he has found a spiritual home in La Santisima Trinidad.

Father Nektariy holds more than one advanced degree in museum curation and restoration of historic buildings.  The beauty of the buildings that house the monastery can be attributed to his hand and supervision.  He has carefully restored to its Colonial California-style splendor.

The church proper holds relics of Saint John of Shanghai and San Francisco, including his epitrechilion as he stands as the monastery’s patron saint. 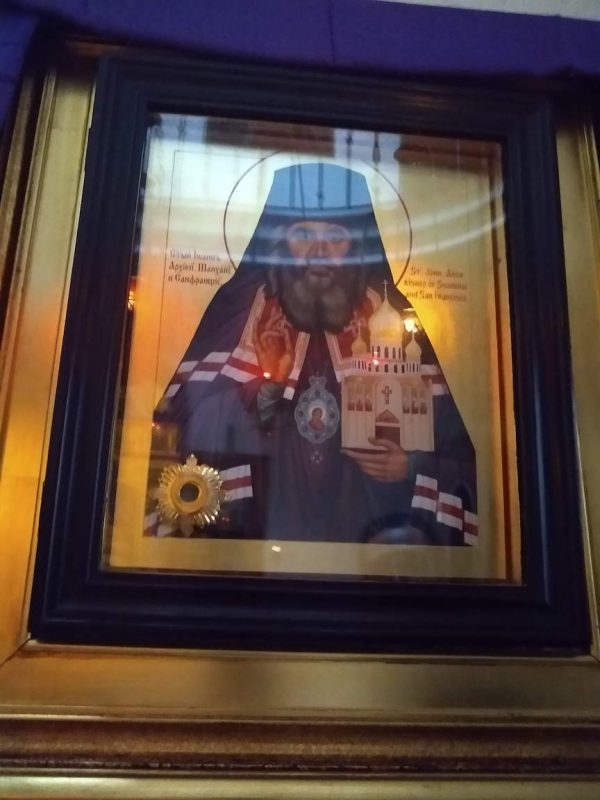 The Monastery of the Holy Trinity serves liturgy in Church Slavonic, Greek and Spanish. Plans are in the making to expand to a larger building, as well as for an Orthodox cemetery to take care of the increasing influx of Russian-speakers into Mexico City.  There are currently approximately 1,000 active members in the Russian Orthodox Church in Mexico City.

Some like Father Arseniy, named after the New Martyr who suffered under the gulag, are of Mexican descent who came to the faith after realizing the ancient origins of Christianity.  The majority of those who attend, however, of Russian or Slavic descent.

While the majority of Mexico has warmed to the presence of other faiths, the Orthodox Church is relatively unknown.  This unfamiliarity with the Church has been the cause of mistaken assumptions.  Father Chistophoros points out that misunderstandings occur as Orthodox clergy are confused for Catholic.  “We have been railed with all kinds of slurs while walking on the street with our rasas because the people mistake us for being Catholic bishops,” Father Christophoro explains. “They vent their anger over the abuses of children and molestations in the Catholic Church. They are surprised when I explain to them that our clergy are allowed to marry and have families, making it easier to identify with the problems that raising a family involves for the members in their congregations.” 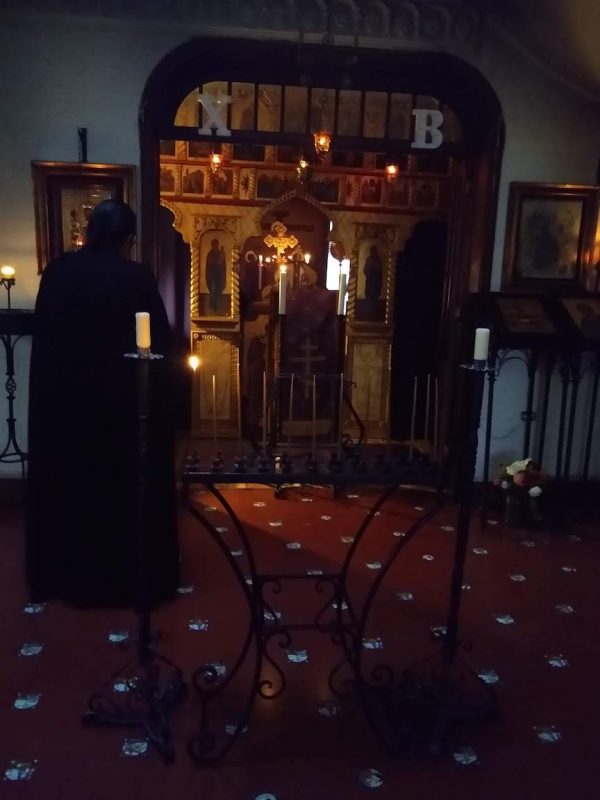 In addition to the monastery, there are two sketes outside of the city.  Daily services are conducted according to the liturgical cycle of a typical Russian monastery adapted to the schedule of the duties of the monks.

Archimandrite Nektariy says, “Mexico is a huge country and is not easy to devote the required attention needed for all of the missions within its bounds. We are active in social work, providing assistance and consultation in the area of immigration; we provide help to Russian women going through divorce or who have problems providing for their children born of Mexican citizens; we offer medical and psychological assistance in Russian for those afflicted by alcohol and drug abuse; we assist the Slavic unemployed, homeless or those who have such issues due to immigration.”

The greatest challenge to the monastery, according to Archimandrite Nektariy, is the lack of funding to support the work of the monastery.  The monks have to support themselves and the mission by working full-time with jobs on the Mexican economy which is infamous for low wages. Father Nektariy himself currently holds a full-time job as a psychiatrist in the local hospital time in order to satisfy the financial needs of the monastery.  He reports that since “the people of the former Soviet Union are not used to providing financial support to churches.”

While many monasteries make their income fro parishioner donations, foreign visitors, and amonastic trades, our monastery in Mexico depends strictly on the mon’s income , which is always insufficient to cover all of the monthly expenses, especially in a city with low wages and high costs of living.

Archimandrite Nektariy exclaims.  “We are a small community with the highest calling: to give testimony of the spiritual treasure of the Russian Orthodox Church, guiding other Orthodox Christians on their path to salvation, and to preserve the Russian Orthodox tradition in the middle of a non-orthodox society, like that of Mexico City.”