On This Date: Repent! (John the Baptist)

Sin is sin, and to the extent that the church follows in John's footsteps, it is not called primarily to "speak truth to power" but to speak holiness to sin: to convict each person of sin and lead to repentance. This was not just true of John's ministry; in the Gospels, Jesus takes up where John leaves off, preaching the gospel with the word, "Repent!"
James M. Kushiner | 11 September 2010 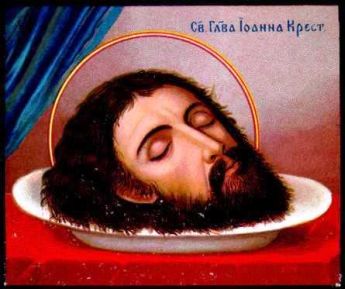 In the Eastern Church calendar, today, August 29, is observed as a strict fast in memory of the beheading of John the Baptist. (The date is also marked in Western calendars as the death of John.) My own parish, like many smaller parishes, does not observe this commemoration liturgically unless it happens to fall on a Sunday, as it did last year.

So last night my wife and son and I visited another parish for the vespers of the Beheading of John. Holy Trinity Orthodox Cathedral (OCA) is an old church for Chicago, completed in 1903, under the direction of the architect Louis Sullivan. Fr. John Kochurov was the pastor of Holy Trinity, under whose supervision the church was built. He was born in Russia, the son of an Orthodox priest.

We arrived while it was still light, but during the hour-long service the windows slowly  darkened, leaving only the candlelight for much of the service. A small choir sang vespers, along with the priest. A congregation of maybe ten joined in the responses. The choir chanted several short hymns in honor of St. John, describing the iniquitous banquet at which the request for John’s head was honored by “an evil king.”

John’s rebuke of the king’s adulterous marriage to Herodias inspires many to see a need to “speak truth to power,” as the phrase goes. But I think John was not quite about that: he spoke of the need for repentance to one and all, not just the powerful. He was not out to single out those in high office. His ministry was to preach repentance to one and all, from the least to the greatest. He told the soldiers who came to him what “fruits of repentance” they must bear. He warned the pharisees about their sins–and Herod his.

In all cases, it was the personal sins that he addressed, even if in the case of some, like certain pharisees, they each might be engaged in a sin such as hypocrisy as a group, in company with others. Sin is sin, and to the extent that the church follows in John’s footsteps, it is not called primarily to “speak truth to power” but to speak holiness to sin: to convict each person of sin and lead to repentance. This was not just true of John’s ministry; in the Gospels, Jesus takes up where John leaves off, preaching the gospel with the word, “Repent!”

Fr. John Kochurov in his own way followed in John the Baptist’s steps.  He returned to Russia in 1907, and in 1917 was serving in St. Petersburg. On October 31, the victorious Bolsheviks arrested Fr. John for leading a procession the previous day, at which prayers for peace had been offered. He was summarily shot by the Bolsheviks with rifles. He was the first known cleric to be executed by the Bolsheviks, the first of tens of thousands priests and monks and nuns. He was later canonized as a saint of the Orthodox Church.

Before the service last evening, we met a friend whom we knew would be there. She brought with her gifts for us from a mutual friend in Moscow. Among the gifts was a framed photograph of St. Tikhon of Moscow, the Russian patriarch who earlier spent years in the United States as bishop of the Orthodox. In 1903 he visited Holy Trinity Cathedral and gave it his blessing. Tikhon later returned to Russia where he became the head of the Russian Church. He was imprisoned by the Bolsheviks for more than a year in 1922 for his opposition to some of their policies. He died in 1925 and is honored as a saint.

It was inspiring to hear the hymns honoring St. John while standing in the same place where two courageous Christians once stood–one, Tikhon, put into prison, like St. John, the other, John Kochurov, executed, like St. John.

Did I say “once stood”? No, they were there, with us, for in the worship of the church we come to the heavenly Jerusalem, to the innumerable angels in festal gathering, and to the assembly of the first-born born who are enrolled in heaven, and the spirits of just men made perfect. As John Kochurov and Tikhon prayed in the same place just over a 100 years ago, we, too, sang the words, “Blessed is man who walks not in the council of the wicked… the Lord knows the way of the righteous, but the way of the wicked will perish”–the message of John the Baptist, and Jesus, and one without which the church fails to even begin to preach the Gospel.