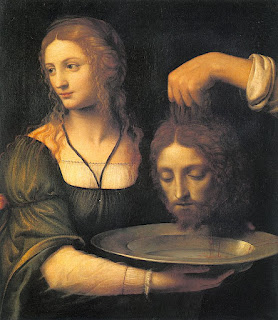 Fornication leads to murder. The first time I read this statement was, I think, in the life of a certain saint who after early victories over lustful passion had suddenly succumbed when visited by a young woman, whom he then, overcome by his shame, murdered and threw into a river. The hagiographer then comments: “and so as often happens, fornication leads to murder.”  At that time, this statement seemed to me to be a gross overgeneralization.

And so, as I am inclined to do, I went to the Scripture to see if such a principle is evidenced there. To my surprise it was (when I will stop being surprised that the Fathers of the Church know the scriptures better than I do?). The first bigamist, Lamech, becomes the second murder after Cain. The Children of Israel are seduced into fornication and a plague spreads through the camp, abated only by Phinehas’s murder of a fornicating man and woman. King David’s adultery with Bathsheba leads to the murder of  Uriah. Amnon’s rape of Tamar leads not only to Absalom’s murder of Amnon, but to civil war. And in our time, there is the unprecedented rate of human abortion following closely on the heals of the sexual revolution. The philosophy “Make love, not war” has resulted in more deaths than all of the wars together. There indeed does seem to be a pattern. Fornication leads to murder.

And yet such a statement afflicts our mind. “No!” we protest. “Not all sex outside marriage leads to murder.” “No! Something so beautiful as loving, consensual sex between two adults cannot and does not carry the seeds of murder just because the couple are not married!” “I cannot accept that!” This is what our minds scream.  Nevertheless, it is what the Scripture and the Saints reveal to us about the fallen human condition.

In the case of Amnon’s rape of his half sister Tamar, there is an interesting line (the whole story is found in 2 Samuel/2 Kingdoms 13). Amnon becomes sick, his love for Tamar is so great. Yet once he has forced her to lie with him, the Scripture says, “Then Amnon hated her exceedingly, so much so that the intense hatred he bore against her was greater than the love with which he at first loved her.” This phenomenon of intense romantic love being very close to intense hatred has not only been noted in the Scripture. Secular literature is full of examples of intense love switching to intense hate, spurned lovers hating, even murdering, their former lovers or spending their life hating and blaming the one they had once so intensely loved. Both uncontrolled desire (often called love) and uncontrolled anger (often called hate) come from the same source in the sick soul. Once one despises God’s law sufficiently to be seduced by the first, it is a small step to be driven by the second.

And today, as we remember the beheading of St. John the Baptist, we are reminded of yet another example of fornication leading to murder. As in all cases, the connection is not linear. “A” does not always pass through “B” and then “C” or any other set of predictable steps to “Z.” Herodias was bitter against John for rebuking her for her adulterous relationship with King Herod, her brother-in-law. She was holding a grudge and abiding her time. The time came when Herodias’ daughter danced for the King at a drunken birthday bash. The King foolishly promised the girl any reward she asked for. At her mother’s bidding, she asked for John the Baptist’s head on a platter. Fornication led to murder. It took a circuitous route, it often does. Sometimes it doesn’t. It’s unpredictable. That’s why it is easy for us to dismiss, despite the saints, despite the scripture, despite the testimony of secular literature, despite millions of abortions. No, we cannot easily accept that we are the murderers, that what feels so right leads to death.

I saw a wonderful movie a couple a days ago on Netflix, My Afternoons with Margueritte (French with English subtitles). The main character is the child of passion. He is not murdered, physically, only psychologically. His single mother is so wounded and unsupported that she cannot, it seems, do anything but hate her child. But this story has a happy ending.  Grace appears in the form of a very old lady named Margueritte (with two t’s).

Grace appears in every life. God abandons no one. The vicious cycle of abuse and seduction and hatred can be broken in Christ–if we want to be free, if we are willing to humble ourselves, listen, learn, repent. No, it is not easy. Yes, we make mistakes and fail along the way. But God is faithful, even when we are not. His Grace is sufficient. His Grace will help us. His Grace will guide us as much as we are willing to guided.