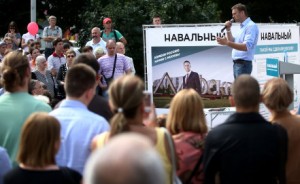 Moscow, August 7, Interfax – Several dozens of young Orthodox members held a picket to protest the support of the LGBT community voiced by Alexey Navalny, a candidate for the post of Moscow mayor, in front of his election headquarters on Wednesday.

Navalny has recently said that LGBT activists should have the right to hold protests where they want to, the picket organizers toldInterfax-Religion.

Dmitry Enteo, leader of the Orthodox public movement God’s Will, said he was surprised by the fact that Navalny “uses this horrible sin instead of helping people rid themselves of it.”

The organizers of the protest said the picket was authorized by the authorities. However, Enteo was detained by police.