Metropolitan Vladimir of Chisinau and all Moldova condemned the parade and demanded that the Chisinau city administration prohibit it from being held.
Pravmir.com team | 22 May 2018 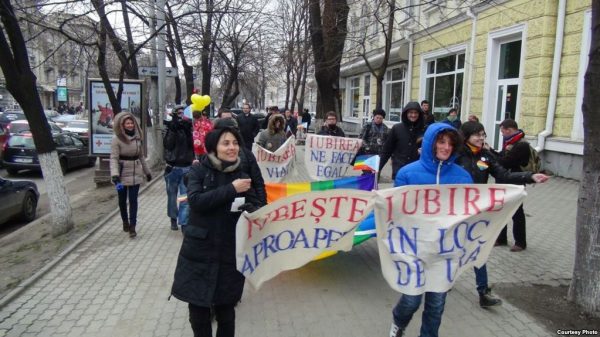 Chisinau, May 21, Interfax – Sexual minorities have held their first successful pride parade in Moldova; they walked along Ismail and Bucuresti streets to the Palace of the Republic.

Orthodox Church members tried to thwart the parade, but the police stopped them and prevented clashes, an Interfax correspondent reported from the ground.

Attempted parades of the past two years were cut short two blocks from Ismail Street, on the junction of Bucuresti and Armenian streets. Orthodox Church members were heatedly expressing their indignation after the parade went past the junction and reached the center of the city.

The parade covered a distance of about three kilometers, which was record for Chisinau. None of the earlier parades went for more than one kilometer.

This year’s parade also had the biggest turnout, which the police estimated at about 500 people.

The parade was successful thanks to the police protection. Thousands of police officers were escorting the parade on both sides of the street. Besides, all streets crossing Bucuresti and other streets in the center of Chisinau were closed for traffic.

Metropolitan Vladimir of Chisinau and all Moldova condemned the parade and demanded that the Chisinau city administration prohibit it from being held. The Orthodox Church organized a march in defense of family values on May 12. President Igor Dodon and his family took part in the march and spoke in defense of traditional family and Orthodox values.

Most viewed articles
First Church in the Antiochian Archdiocese Named for St. Xenia of St. Petersburg Prepares for Feast Day289
Patriarch Kirill: Not Only People, But Churches Too, Can Depart from God178
My World’s Different105
A Christianity of the Catacombs104
Patriarch Porfirije of the Serbia: Our Position on the Church Issue in Ukraine Has Not Changed90
Thoughts on Theophany and Revelation82
Archbishop Makarios of Australia: ” the Great privilege of the Orthodox Church is that we live in communion”38
1
Most popular authors
Pravmir.com team595
Protopresbyter Themistoklis Mourtzanos105
Archpriest Lawrence Farley104
Elissa Bjeletich82