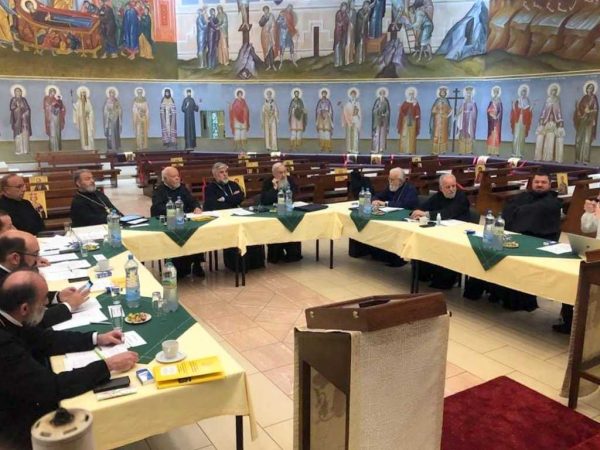 The Assembly of Canonical Orthodox Bishops of Germany (OBKD) at its 22nd meeting stressed the importance of the Holy Eucharist during the Covid-19 crisis.

The meeting took place on June 23, 2021, in Cologne, at the headquarters of the Orthodox Antiochian Metropolis of Germany and Central Europe, with the participation of representatives of the Greek, Antiochian, Serbian and Romanian dioceses.

The meeting was chaired by His Eminence Metropolitan Augustinos of Germany and Exarch of Central Europe (Ecumenical Patriarchate).

The bishops draw attention to the undeniable importance of the Eucharist and the Eucharistic community of believers for church life. Thus, possibilities are exposed through which parishes and believers can be helped to cope with the current situation.

The draft text was prepared by a working group of theologians from all Orthodox dioceses in Germany under the guidance of Serbian Bishop Grigorije.

The members of the Episcopal Assembly also discussed the festivities planned for the 1700th anniversary of the First Ecumenical Council of Nicaea (325) in 2025.

Shortly before the European Parliament voted on the so-called Matić report on “The situation regarding sexual and reproductive health and related rights in the EU concerning women’s health”, OBKD discussed the document and pointed out that the draft does not take into account the rights of unborn children.

“According to Orthodox teaching, man was created in the image and likeness of God. This likeness of man is his permanent attribute, which cannot be taken from him and establishes the dignity and equality of all humans. This dignity of life, especially in the case of unborn children, is inviolable and inalienable.”

“We, therefore, consider it problematic that this draft resolution does not take into account these rights of unborn children. These are at least as important as the concern for the protection of women from exploitation, oppression and violence, for their health and their rights, on which the draft resolution is based,” the OBKD hierarchs underlined.

The autumn meeting was set for November 11, 2021, at the headquarters of the Romanian Metropolis in Nuremberg.