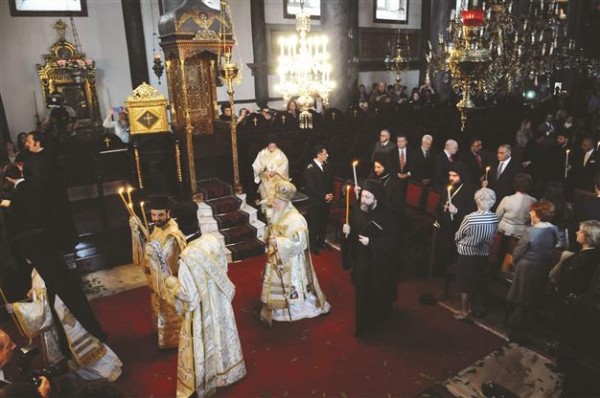 In the predawn hours of Sunday, many worshipers gathered outside the Greek Patriarchate in the Fener district of İstanbul, holding a candlelight vigil and praying until sunrise. Ecumenical Patriarch Bartholomew, spiritual leader of about 300 million Orthodox Christians around the world, led the service at the Aya Yorgi Orthodox Church located at the courtyard of the Greek Orthodox Patriarchate.

The mass was attended by locals as well as visitors from Greece and other parts of Europe.

The liturgy was attended by the members of İstanbul’s Greek Orthodox community and Orthodox Christians from other countries.

Other Orthodox Christians also celebrated Easter at religious ceremonies in churches across Turkey on Sunday.

Easter masses were also performed in cities with small Christian populations, such as in the southern provinces of Hatay and Mersin. The Antakya Orthodox Church held a ceremony on Sunday.

Ecumenical Patriarch Vartholomeos in his message on Sunday for Easter noted that “despite the apparent technological progress of the human society, despite the declarations for human rights and for religious freedom, the religious and the racial hatred is increasing throughout the world and provokes dangerous tensions” said Vartholomeos adding that “Unfortunately, the people can’t tolerate the diversity in other human beings. They can’t accept the different racial origin, the different political, religious and social attitudes and beliefs” he concluded.

Bartholomew was welcomed at the Orestiada Square by Metropolitan Damaskinos of Didymoticho, political, church and armed forces representatives…