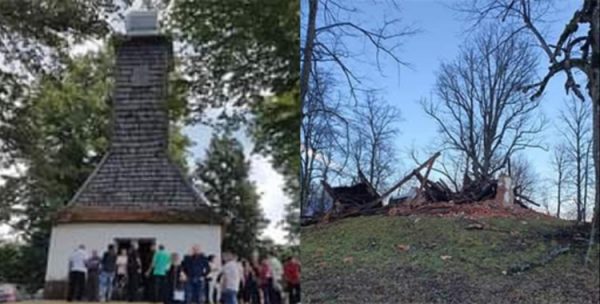 The Church of the Ascension in Majske Poljane in Banija was completely destroyed. Photo: spc.rs

Several Orthodox churches were damaged or completely destroyed in a 6.4 earthquake that rocked Croatia on Tuesday. Strong aftershocks on Wednesday also caused damage throughout the country, and at least seven people are known to have died in Tuesday’s disaster.

The Serbian Orthodox Church reported on Tuesday that the damage to St. Petka Church and the parish house in Sisak was serious enough to completely interrupt the liturgical life of the community in central Croatia. Repairs to the church were finished just 15 days ago. The Church of St. Spyridon and the parish house were also seriously damaged in nearby Petrinja, as well as the Church of St. Nicholas in the city cemetery.

The priests from both communities and their families were forced to leave their homes. The Serbian Church also reported yesterday that the Church of the Ascension in Majske Poljane in Banija, also in central Serbia, was completely destroyed. The church was built in 1820, and thus celebrated its bicentennial this year.

His Eminence Metropolitan Porfirije of Zagreb wrote in a statement on the damage that in spite of everything that has befallen the Church communities, they continue to believe that God does not allow us to be tempted above what we are able to bear, and that He will always provide a way out, as St. Paul teaches.

“Therefore, let these difficulties, according to another great prophet, Peter, be understood as a fire in which our Christian faith will shine brighter than gold (1 Peter 1: 6-7)… May this experience, though tragic and painful, make us feel different about the misunderstandings that plague us in times of good and sometimes so easily distract us from the healing power of God’s peace and eternal meaning,” His Eminence writes.

His Grace Bishop Gerasim of Gornji Karlovac also said he would be visiting the people to support them and bring them food, water, and blankets.

Any who may be interested in donating to the suffering communities can do so with the following bank information: