Source: Rumblings from a Desert Cave
Did you know that you are called to be a missionary? It’s true. You may not have to leave everything behind and go to a foreign land, as St. Herman did; but you can certainly pray, and fast, and give, and struggle to overcome your passions and pursue purity. You can certainly live in such a way that people receive the merciful, patient, forgiving love of God from your presence.
Priest John McCuen | 08 August 2009 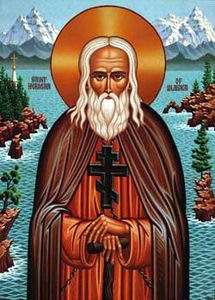 Everyone who studied history in the education system in this country knows that the United States was first settled by people fleeing religious persecution in England. From the Pilgrims, who came to Massachusetts in 1621, to the establishment of the colony of Pennsylvania for the Quakers, Maryland for the Catholics, and the New England colonies for various protestant groups, arose the states that would become the United States of America. But almost no one knows that the Russians were exploring the west coast of North America at roughly the same time; and that settlements of trappers and farmers were established from Alaska down to Fort Ross in California, not far from what is now the city of San Francisco. The presence of permanent Russian settlements, together with the people native to the areas of these settlements, caused the Russian Orthodox Church to send clergy to the New World to tend to the spiritual needs of the Russians, and to bring the good news of our salvation in Jesus Christ to the people who had not yet heard of His life, and death, and resurrection from the dead.

Every one of us would benefit from studying – and emulating – the life of our holy father Herman of Alaska. His love for the Lord led him to embrace the monastic life of prayer and fasting, of purity and voluntary poverty of the things of this world. His love for the people of God, and his obedience to his spiritual father led him to leave the life of Valaam for a new world, filled with challenges and dangers. Indeed, one of his companions, St. Juvenaliy, was martyred for the faith, as was one of the converts who came from the labors of the Russian missionaries, St. Peter the Aleut, who was tortured and killed by the Spanish in San Francisco because he would not renounce the Orthodox Church and become a Roman Catholic.

You are called, as was St. Herman, to live as an Orthodox Christian in the midst of a people who are not Orthodox. Each one of us is called to be an example of the faith to which we joined ourselves; to be examples of the Lord Who has come to us to save us, and all who are made in the image of God. Did you know that you are called to be a missionary? It’s true. You may not have to leave everything behind and go to a foreign land, as St. Herman did; but you can certainly pray, and fast, and give, and struggle to overcome your passions and pursue purity. You can certainly live in such a way that people receive the merciful, patient, forgiving love of God from your presence. If we will do these things, people will come to see a different way of life is possible for us; and some will want to pursue it; and you can tell them about our Lord Jesus Christ, and the way of life that draws us closer to Him that we have been blessed to receive in the Orthodox Church.

Brothers and sisters, as St. Herman taught, let us at least “make a vow to ourselves, that from this day, from this hour, from this very moment, we shall strive above all else to love God and to fulfill His Holy Will!” Through the prayers of our venerable father Herman of Alaska, O Lord Jesus Christ our God, have mercy on us. Amen. 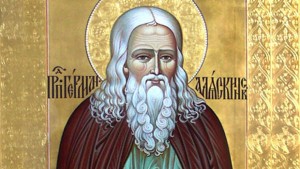 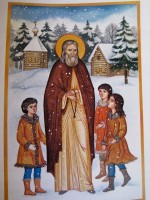 Fortunately for the Aleuts and all Alaskans, St. Herman hasn’t ever left them. Miracles attributed to…

Most viewed articles
Open Doors warns of rapidly growing threat of digital persecution against Christians109
Saved? Not Yet98
Focusing On God Instead Of Ourselves82
Assembly of Bishops Announces Peace of Mind, a Training Program in Mental Health First Aid65
Metropolitan Anthony of Volokolamsk Makes a Working Visit to Paris64
Finding God Amidst the Noise42
Bishop Irenei of London and Western Europe visits the Memorial Church of St Job and the Church of the Resurrection of Christ in Brussels25
Most popular authors
Pravmir.com team154
Tola Mbakwe109
Archpriest Basil Ross Aden97
Fr. James Guirguis82
Archpriest Stephen Freeman40