Outsiders no more!Holiness isn’t something to which only the clergy are called!

I sometimes think that the greatest challenge facing the Church today is not educational or financial. It is not how to convince our people to read more theology or give more money. Rather, it is to see themselves as they really are – as the Holy Church of God, called by Christ, separated from the world, living as pilgrims and exiles in this age, belonging to the age to come and the eternal Kingdom. If we can recover this Biblical and patristic vision of who we are, then our educational reading and financial giving will take care of themselves.
Archpriest Lawrence Farley | 22 May 2009

Every Sunday at our little church in Langley, British Columbia, we do what our deacon tells us to do when he exclaims, “Let us love another!” – we exchange the Peace, each one offering the Holy Kiss to those beside him or her [it takes about 10 seconds or so]. This would not surprise Saint John Chrysostom, since of course his flock exchanged the Peace as well. What would surprise him is the fact that our catechumens are present, and that they participate in this exchange.

In Chrysostom’s day, the catechumens were not present for the exchange of the Kiss of Peace. They were gathered together by the deacon and prayed for in the Litany of the Catechumens, given a blessing by the celebrant under his extended hand in the Prayer for the Catechumens, and then dismissed. That is, they were “kicked out” and the doors were closed behind them. There was no coffee hour following the service. Presumably they just went home. Some people have suggested that the reason why the catechumens were dismissed after hearing the Scripture readings and the sermons was because they could not receive Holy Communion. That is true, but only half the story. The real reason they were dismissed is that they couldn’t do anything. Not only could they not receive Holy Communion, they could not exchange the Holy Kiss with the baptized laity since, as Hippolytus in his Apostolic Tradition tersely says, “their Kiss is not yet holy.” They could not offer the intercessory prayers with the faithful, since they were not yet a part of the Royal Priesthood, which alone had the right of access to offer those prayers. [The intercessory Great Litany was not then at its present place in the beginning of the Liturgy, but was offered later, after the catechumens had left.] Everything done at the so-called “Liturgy of the Faithful” – the intercessions, the Holy Kiss, the Anaphora, the reception of Holy Communion – could only be done by the faithful, by the Holy People of God. And since the catechumens were “not yet holy,” they had no reason to remain. 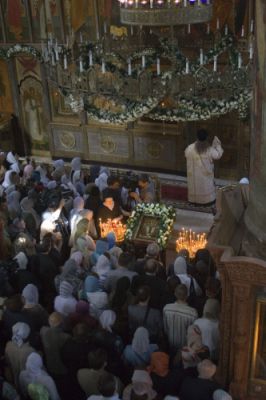 I say all this not necessarily to critique or change our present practice of allowing catechumens to pray the intercessory prayers and exchange the Peace, but rather to focus more closely on the holy nature of the baptized and chrismated communicants, the faithful laity. When the celebrant invites the laity to come forward and receive the Holy Gifts, he chants, “The Holy Things for the holy!” That is, the Holy Gifts of Christ’s Body and Blood are offered to the laity precisely because they too are holy. It is too easy to forget the holy status of the initiated communicant, and to dismiss them as “just lay people.”

Since the effective collapse of the  catechumenate as a living institution centuries ago, the temptation has been to consider laity as the “outsiders,” and the clergy as the holy “insiders.” The clergy got to hear the prayers (though all the laity said “Amen” to them, even if they hadn’t heard them). The clergy received Holy Communion. Assuming that more than one priest was serving, they exchanged the Peace. In the classic pattern of worship in the 19th century, the laity were reduced to all but passive participation. Theirs it was to watch and listen – and, of course, to pray, but silently. Verbally expressive worship was the task of the clergy and their helpers, the choir. Indeed, one label for the laity was the kosmikoi, the “worldly” – outsiders indeed. In this understanding, holiness began at the entrance to the altar. Actually, it begins at the entrance to the nave, which is why in our Rite of Consecration of a Church Temple, it is not just the Holy Table that is consecrated, but the entire interior of the nave; the altar area receives no special or separate consecration.

The resurgence of the catechumenate as a living institution in our day helps to correct this erroneous and untraditional understanding of the laity. Even when they are not dismissed, even when they participate in the intercessions and the Peace, the fact that an identifiable body of persons exists in the Eucharistic assembly, who cannot yet receive Holy Communion, places greater prominence on the initiated status of those who can. That is, the presence of catechumens reveals that it is the chrismated laity, the communicant faithful, who are the real insiders. Holiness is not the preserve and possession of the clergy alone. Holy status belongs to the laity as well. Indeed, in this sense the clergy are a part of the laity, the laos, the People of God.

I sometimes think that the greatest challenge facing the Church today is not educational or financial. It is not how to convince our people to read more theology or give more money. Rather, it is to see themselves as they really are – as the Holy Church of God, called by Christ, separated from the world, living as pilgrims and exiles in this age, belonging to the age to come and the eternal Kingdom. If we can recover this Biblical and patristic vision of who we are, then our educational reading and financial giving will take care of themselves. As long as the laity regard themselves as the outsiders, as the kosmikoi, of course they will act like the world around them. It is only when they regard themselves as called to holiness, as saints, as belonging to God and called to strive to share His holiness, as being in the world, but not of it, that the Church will begin to regain its full strength and vigor. Through the prayers of our father among the saints, Saint John Chrysostom, may God hasten the day.