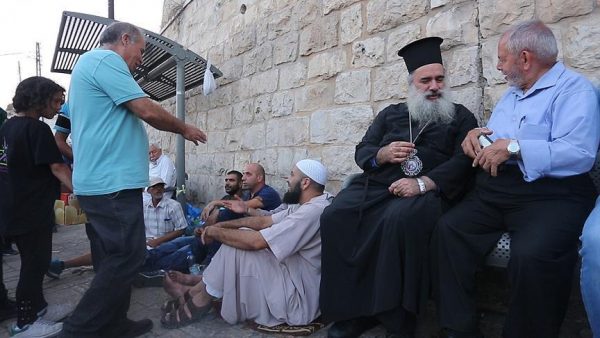 The image of a Palestinian Christian reading from his bible while the crowd of Muslim worshippers he stood among prostrated themselves on the ground, or Christian clergy joining their Muslim counterparts at the head of processions, have been widely shared during the past week of unrest over one of Jerusalem’s most important holy sites.

During more than a week of tension over new Israeli restrictions on access to Al-Aqsa Mosque, Jerusalem’s Greek Orthodox Archbishop Atallah Hanna has been among the most vociferous in his support of unity between Palestinian Christians and Muslims.

“It is our duty as Palestinian Christians and Muslims to remain united against Israel’s greed, which targets all of us,” he told Anadolu Agency as he mingled with the crowds gathered for prayers outside the walls of Islam’s third-holiest mosque.

“As everyone knows the Palestinian people are united against the occupation and racism,” he said.

Palestinian Muslims have refused to enter the mosque because of new metal detectors installed at its entrances following a gun attack that killed two Israeli police officers and three Palestinians.

Israel claimed the measures were a response to the attack but Palestinians see the measures as an attempt to expand Israeli control over the site, which according to historical agreements should remain under Muslim management and reserved for Muslim worship, though non-Muslims can visit. The mosque is also revered by Jews, who call it the Temple Mount.

“Those who target Al-Aqsa Mosque are the same ones who target our Christian endowments that are seized and stolen illegally.”

Around half of Palestinian Christians are thought to belong to the Greek Orthodox Church, while others are spread among different denominations.