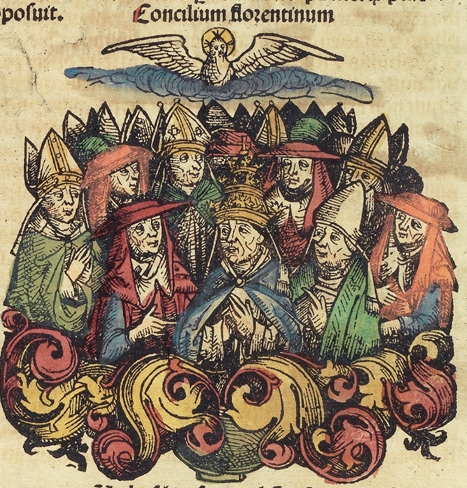 Recently I was asked a very important and perceptive question by a very smart catechumen, a man converting from Roman Catholicism.  He knew that at the Council of Nicea (325 A. D.) the assembled bishops voted for the homoousios teaching of Christ’s full divinity by an overwhelming majority of something like 318 to 2.  He also knew that at the Council of Florence (ca. 1439 A. D.) the assembled bishops also voted for union with the Pope and the western church by a similar kind of majority, the only significant dissenting vote being that of Mark of Ephesus.  So, he asked, if the Orthodox accept the Council of Nicea because of the episcopal consensus present there, why do they not also accept the legitimacy of the Council of Florence, since it was attended by a like episcopal consensus?  Why do the Orthodox not consider the assembly at Florence to be an Ecumenical Council?  Why are the Orthodox not therefore now Roman Catholics?  It was a serious and sensible question, from a person of considerable theological sophistication.

The answer involves a recognition of the importance of what has been sometimes called “reception” in the history of the councils, and of how episcopal gatherings are recognized as “Ecumenical Councils” by the Orthodox.

An episcopal gathering is recognized as authoritatively teaching the truth—i.e. as an “Ecumenical Council”, one with relevance to the Church throughout the entire ecumene or world—not simply by the voting numbers, but by how that council was received by the Church throughout the world after the council ended.  It is true that at Nicea the assembled bishops voted overwhelmingly to condemn Arius, and to approve the homoousios formula expressing Christ’s full divinity.   It is also true that the Nicene gathering was not finally accepted by overwhelming numbers throughout the world as authoritatively teaching the truth until decades later.

In the decades following the Council of Nicea, the champion of the council, Athanasius was regarded very controversial, and he was repeatedly condemned and exiled.  Other councils were held and other formulae tried out.  Let’s scrap homoousios.  How about homoiousios—not “of the same essence”, but “of like essence”?  Or how about we forget about all talk of essences (ousia) and just say that the Son is “like” the Father?  In those years other councils were held and other alternatives to Nicene teaching tried out.

The debate was held over decades and across the miles, and it was spectacularly messy, inefficient, confusing, and something of an embarrassment to the Church’s professed unity.  But eventually pretty much everyone figured out that it all came down to a choice between Arius and Athanasius—which of course was not much of a choice at all.  When the dust finally settled years later, the Church knew that Nicea had it right all along.  Nicea turned out to be “an Ecumenical Council”, and the other councils were then regarded as false councils.  But that was with hindsight.  During those tumultuous post-Nicene decades, debate and confusion reigned.

So, for a Council to be regarded as teaching the truth and as “Ecumenical” (the label is often more confusing than helpful) what is required is its reception and acceptance by overwhelming numbers of the Church—not by everyone, but by a clear consensus.  For of course there will always be heretical dissenters.  If the truth were that obvious, there wouldn’t have been need for a Council in the first place.

This is different than in current Roman Catholicism, where what is required for a gathering to be declared “Ecumenical” is a pronouncement by the Pope.  When Pope John XXIII called his bishops to the Vatican in the early 60s, everyone coming to the gathering knew that they coming to an ecumenical council—because the Pope said so.  Debate and eventual reception by the Church at large in the years following was not required—nor really allowed.  Opposing Vatican II was not something you did if you knew what was good for you, especially if you were a bishop.  The Roman Catholic understanding of Ecumenical Councils is different than the early Church’s understanding of it, for the Roman Catholic Church is papal in a way that the early Church was not.

Fast forward from Nicea to Florence in the fifteenth century.  The Orthodox Church in the east had been in effective schism with the west for a long time.  The date of the schism is usually (and arbitrarily) given as 1054, but things didn’t sour really badly until 1204 when the Crusaders sacked Constantinople and the Pope put a Latin on the episcopal chair there.  Attempts were made to sort things out, and everyone knew that the schism between east and west needed to get resolved.  Ostensibly that was why Orthodox bishops came from the east to the west in the city of Florence.

Actually they were there because the Emperor desperately needed military help from the west if Constantinople was to survive the impending attack from Turks.  He had made a tour of the west trying to garner money, arms, and support and had come up dramatically short.  The Pope offered to throw his support behind the project—but only on condition that unity could be achieved between east and west.  This, of course, was code for “complete capitulation on the part of the east to the west”.  And everyone knew it.

So it was that the eastern bishops showed up in Florence with their Emperor under strict orders to resolve the schism no matter what.  In other words, the bishop sat through the sessions with the Imperial gun to their heads.  Not surprisingly, most of them caved in, signed onto whatever the Pope and the western church wanted, and declared the schism resolved.  This involved accepting things like the supremacy of the Pope, purgatory, and the filioque addition to the Creed.  But at least one person refused to sign:  Mark, bishop of Ephesus.

The reception of the Council of Florence was in marked contrast to the reception of the Council of Nicea.  Eventually Nicea came to be accepted by the overwhelming majority.  The Council of Florence was a non-starter from the beginning, with many bishops retracting their signatures and their approval as soon as they got back home, especially when faced with popular outrage.  Bishop Bessarion of Nicea fled back to the west where he was rewarded with a cardinal’s hat.  Bishop Isidore of Kiev returned to Kiev was promptly thrown into prison for his perceived betrayal of Orthodoxy.  He escaped and eventually ended his days as the Latin-rite bishop of Sabina.  Pope Pius II later gave him the title of the Latin Patriarch of Constantinople, which of course by then meant nothing and involved no real jurisdiction.

The Orthodox east continued in its steadfast rejection of the Florentine gathering (expressing their definitive rejection by eventually canonizing Mark of Ephesus).  At Nicea, there was no Imperial gun aimed at episcopal heads; at Florence there was.  Just as marriages are “annulled” if free consent is lacking, so with councils.  Florence was something of a shot-gun wedding/ council, and so lacked the conditions of a true council (as the immediate aftermath proved).

What does all this mean?  Two things.

First of all it means that Christ’s promised guidance of the Church does not involve magic.  Fallible bishops do not magically become infallible when they gather together in council.  If they did, there would never have been any false councils (like the Council of Hieria of 754 which condemned icons).  Christ promised to guide His Church as a whole, not a collection of bishops or a single bishop like the Pope.  The Church may conclude that it has been rightly guided when it finally reaches a settled consensus about something (like the homoousios or the legitimacy of icons), a consensus which is never overthrown.

But (and this is the second point), it takes time to reach this final and settled consensus, and during that time of debate and argument, things will be messy.  Orthodoxy is sometimes criticized for its administrative inefficiency, and it is suggested that things would be better, less messy, and more efficient if we had a Pope or an Ecumenical Patriarch who would be “First Without Equals” (to quote an actual recently used phrase).

I agree.  Things would be less messy and more efficient.  We could skip the whole embarrassing process of disagreement and debate and jump straight to a conclusion—which would often be the wrong conclusion.  Because, as said above, Christ has not promised to guide a single person, be that person Pope or Patriarch, but the Church as a whole, and bypassing the process of debate and eventual reception means that we thereby reject the very process by which Christ has promised to guide us.  Experience—historical and recent—proves that when bishops ignore this messy process of conciliarity leading to consensus, the results are not pretty.

The final result of all of this is that we must all be patient.  Christ will guide His Church, but we must allow for the process of debate which eventually leads to consensus and reception.  The Emperor was not content to wait for it in the fifth century, but opted for a more efficient process involving use of the army.  The result was the schismatic loss of Egypt—a loss that continues to this day.  Patience is important—both in our personal lives, and in the life of the Church.

Is Christianity on the Decline in the West?

This question is often asked by concerned Church people, especially those in the “mainline” churches here in Canada…