Patriarch Daniel of Romania: Today We Have Opened a New Gate to Heaven 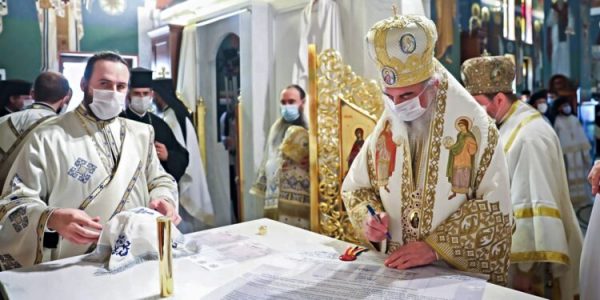 The Patriarch of Romania consecrated a new church of Izbuc Monastery in Bihor County on September 20. At the end of the service, he explained the significance of the hymns chanted and compared any church dedicated to the Holy Trinity with a gate to heaven. We are called to enter it and become each “a sanctified Church,” that is, “the place of the grace of the Most Holy Trinity.”

Patriarch Daniel explained the spiritual meanings of the consecration service of a church. Every place of worship has the following characteristics:

Place of sacrifice, based on sacrifice

His Beatitude Patriarch Daniel noted that the consecration of a church is also a service of honour to the Holy Martyrs. “Historically, the first churches were built on the graves of martyrs, and theologically, the Holy Martyrs are closest to the sacrifice of Christ’s sacrificial and humble love,” he explained.

“There is no greater love than to lay down one’s life for one’s friends. These friends of Christ who are martyrs have a special place – namely, they are the closest to the Holy Altar,” His Beatitude said during his speech.

“Therefore, only relics of martyrs are placed at the foot of the Holy Table in an Orthodox church and in the cloth icon called antimension,” the Patriarch recalled. This practice is based on the Book of Revelation, “where it is noted that in front of the throne of the Lamb, that is, the throne above, were those who washed their garment in blood.”

Thus, the patriarch explained, “the table of the Holy Altar represents the tomb of the Lord and the throne of His glory.”

“Today we have opened a new Gate to Heaven and a new house of the Most Holy Trinity,” His Beatitude Patriarch Daniel said.

“When we knocked at the doors of the church entrance, we said, Lift up your heads, you gates; lift them up, you ancient doors, that the King of glory may come in.’ These words are from a psalm that refers to the Ascension of the Lord,” he explained.

“Therefore, entering the new church, after knocking on the entrance doors, means entering heaven. It is equivalent to an ascension of the clergy and believers to heaven, to the state of spiritual communion with the Most Holy Trinity and all of God’s Saints”, said Patriarch Daniel.

“We now better understand why every consecrated and painted Orthodox Church is an icon of the Kingdom of Heaven, a house of God and a new part of heaven,” he added.

A gift made eternal by God and given back to man

Like the Sacrament of Holy Eucharist, in which man’s gifts, bread and wine, are changed into eternal gifts and given back to the faithful, likewise, the mystery of the consecration of a church involves a similar act.

“Until now, this church has been the gift of people, of the monastery and of the faithful, brought to God. Through consecration, it becomes God’s gift to people,” Patriarch Daniel highlighted.

“The church is, therefore, the place where we receive the divine, holy, pure, immortal, heavenly, life-creating Mysteries of Christ. We receive heavenly, not earthly, life-giving mysteries. So we offered earthly gifts and in return, we receive heavenly gifts,” the Patriarch went on saying.

“From now on, this church belongs not only to the monastery. It is also the habitation of the Most Holy Trinity. It is the gift of humans to God and the gift of God for the salvation of humankind,” he added.

In conclusion, the Romanian Patriarch instructed the faithful how to pray when they enter the Holy Altar for veneration immediately after the consecration service. He said that this Romanian tradition is unique in the Orthodox world and taught the believers to pray in secret, saying, “Sanctify, Lord, my life and beautify it, as you sanctified this beautiful church today.”

“Along with the sanctification of the walls, the souls of those who participate in the consecration of the church are sanctified,” Patriarch Daniel reminded the faithful.

“When we sanctify those who participated with Holy Water, it means that the Holy Spirit wants each of us to become a consecrated church, to be a place of grace of the Most Holy Trinity,” he noted.

“Today, this church is not only of the monastery but also the house of the Most Holy Trinity, it is the gift of men to God and the gift of God for the salvation of men,” he added.

As the sanitary protection rules require the social distance of the faithful two meters from each other inside the place of worship and 1.5 meters outdoors, the altar of the new church built at Izbuc Monastery will remain open for worship for a week.

The canonical visit of Patriarch Daniel to the Romanian Orthodox Diocese of Oradea took place on the 340th anniversary of the first documentary attestation of the Diocese, 325 years since the diocese and its hierarch were mentioned in the Diploma of the Austrian Emperor Leopold I, and 100 years of at the re-establishment of the diocese after the Great Union.