Patriarch Daniel on New Year: Focus on Spiritual Side of Life

Source: Basilica.ro
The Patriarch of Romania stressed that it is more important to grow spiritually than biologically and materially at the start of the New Year.
Aurelian Iftimiu | 03 January 2020 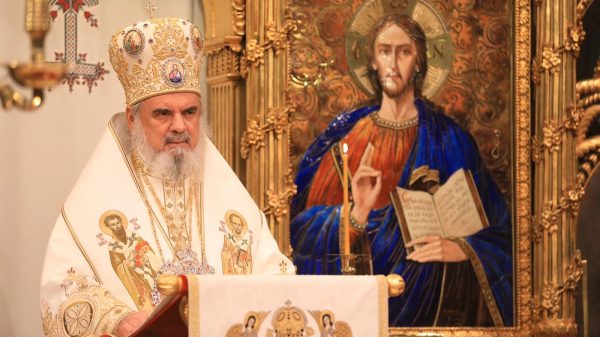 In his first homily of 2020, Patriarch Daniel offered his reflections on Christ’s childhood and referred to the life of Saint Basil, one of Christianity’s greatest universal teachers.

‘Jesus grew in wisdom and stature,’ said the Patriarch citing the day’s gospel reading from Luke.

‘At the age of twelve, He had a wisdom superior to His biological age. He knew as much as all the wise men in the temple together, and even more than that.’

‘Grace is God’s work in man. And this work of Jesus’ Divinity in His human nature was shown gradually,’ Patriarch Daniel added Jan. 1, 2020.

‘We must not only grow biologically, but also spiritually in wisdom and grace. In wisdom and prayer. In the work of God’s grace in our life. Therefore, this spiritual growth is often more important than just biological growth.’

The patriarch went on to reflect on the meaning of Christ’s circumcision saying that it is a preparation for the Mystery of Baptism.

In his homily, the patriarch spoke of Saint Basil noting that he is a popular saint among Romanians, since almost 600,000 people bear his name.

Saint Basil the Great was ‘a learned man,’ but he also preached by deed.

The patriarch recalled that St Basil cared for the elderly, the sick, and the poor, and built a small town called the Basiliad as a house for strangers and travelers, and a site for professional medical treatment.

“It is said that there was a leprosorium there,” the Patriarch recalled, “and St. Basil often went and visited all the sick, prayed for them and sometimes embraced the lepers without fear of getting sick. He was at the same time a spiritual and a practical man.”

‘He celebrated the Divine Liturgy four times a week. He was a great faster and, at the same time, a very brave fighter.’

St. Basil had a lot of courage, facing the Arian heretics who had on their side Emperor Valens. The Saint endured the persecutions of the emperor and constantly professed the truth of the dogma of the Holy Trinity, Patriarch Daniel stressed.

St. Basil the Great left to Orthodoxy the Monastic Rules as well as the text of one of the Liturgies which is celebrated ten times a year, including on January 1.

The Patriarch pointed out that not only Christians but also pagans who admired St Basil’s wisdom and kindness mourned his death.

‘We learn from this saint that we must always combine the true faith with the right lifestyle and proper action, with the work of mercy.’

At the end of his sermon, Patriarch Daniel spoke of the beginning of the civil new year noting that it is a moment of review.

“We must think not so much of material achievements, but of how many good and bad deeds we did in the past year and what we want to do to progress spiritually in the year we entered.”

After the Divine Liturgy a Doxology was officiated, following which the Year 2020 was declared a “Solemn Year of the Pastoral Ministry of Parents and Children” and a “Commemorative Year of Romanian Orthodox Philanthropists” in the Romanian Patriarchate.