The Struggle Against The Normal Life 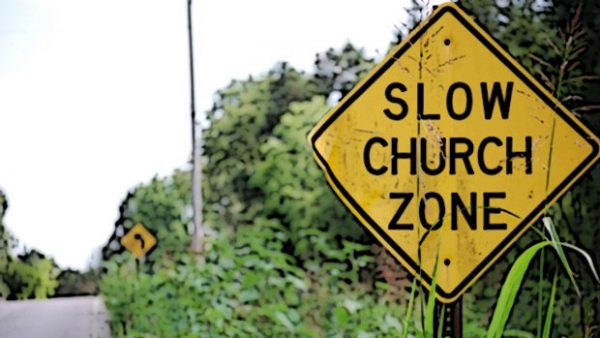 Within the Christianity of our time, the great spiritual conflict, unknown to almost all, is between a naturalistic/secular world of modernity and the sacramental world of classical Christianity. The first presumes that a literal take on the world is the most accurate. It tends to assume a closed system of cause and effect, ultimately explainable through science and manageable through technology. Modern Christians, quite innocently, accept this account of the world with the proviso that there is also a God who, on occasion, intervenes within this closed order. The naturalist unbeliever says, “Prove it.”

The sacramental world of classical Christianity speaks a wholly different language. It presumes that the world as we see it is an expression of a greater reality that is unseen. It presumes that everything is a continuing gift and a means of communion with the good God who created it. The meaning and purpose of things is found in that which is not seen, apart from which we can only reach false conclusions. The essential message of Christ, “The Kingdom of God is at hand,” is a proclamation of the primacy of this unseen world and its coming reign in the restoration of all things (apokatastasis, cf. Acts 3:21).

The assumptions of these two worldviews could hardly be more contradictory. The naturalistic/secular model has the advantage of sharing a worldview with contemporary culture. As such, it forms part of what most people would perceive as “common sense” and “normal.” Indeed, the larger portion of Christian believers within that model have no idea that any other Christian worldview exists.

The classical/sacramental worldview was the only Christian worldview for most of the centuries prior to the Reformation. Even then, that worldview was only displaced through revolution and state sponsorship. Nonetheless, the sacramental understanding continues within the life of the Orthodox Church, as well as many segments of Catholicism. Its abiding presence in the Scriptures guarantees that at least a suspicion of “something else” will haunt some modern Christian minds.

An assumption of the secular/naturalist worldview is that information itself is “objective” in character: it is equally accessible to everyone. The classical worldview assumes something quite different. “Blessed are the pure in heart,” Christ says, “for they shall see God.” The Kingdom of God is not an inert object that yields itself to public examination. The knowledge of God and of all spiritual things requires a different mode of seeing and understanding. St. Paul says it this way:

But the natural man does not receive the things of the Spirit of God, for they are foolishness to him; nor can he know them, because they are spiritually discerned. (1Co 2:14)

This understanding disturbs the sensibilities of many contemporary Christians. Some go so far as to suggest that it is “gnostic” (by this they mean that the very notion of spiritual knowledge that is less than democratic is suspect). Sola Scriptura is a modern concept that posits the Scriptures as subject to objective interpretation. The Scriptures thus belong to the world of public, democratic  debate, whose meaning belongs within the marketplace of opinion. The Scriptures are “my Bible.”

The classical model is, in fact, the teaching found in the Scriptures. It utterly rejects the notion of spiritual knowledge belonging to the same category as the naturalistic/secular world. It clearly understands that the truth of things is perceived only through the heart (nous) and that an inward change is required. It is impossible to encounter the truth and remain unchanged.

The classical model, particularly as found within Orthodoxy, demands repentance and asceticism as a normative part of the spiritual life. These actions do not earn a reward, but are an inherent part of the cleansing of the heart and the possibility of perceiving the truth.

The rationalization (secular/rationalist) of the gospel has also given rise to modern “evangelism.” If no particular change is required in a human being in order to perceive the truth of the gospel, then rational argument and demonstration becomes the order of the day. Indeed, modern evangelism is largely indistinguishable from modern marketing. They were born from the same American social movements.

The classical model tends to be slower in its communication, for what is being transmitted is the fullness of the tradition and the transformation of each human life. Evangelism, in this context, has little to no relationship with marketing. The primary form for the transmission of the gospel is the community of the Church. The Christian faith, in its fullness, is properly only seen in an embodied community of believers living in sacramental union with God through Christ by the Holy Spirit. In the early Church, the catechumenate generally lasted for as much as three years. The formation that took place was seen as an essential preparation for the Christian life. “Making a decision” was almost beside the point.

A complicating factor in this struggle is the fact that the dominant culture (naturalistic/secular) has taken up traditional Christian vocabulary and changed its meaning. This creates a situation in which classical Christianity is in constant need of defining and understanding its own language in contradistinction to the prevailing cultural mind. The most simple terms, “faith, belief, Baptism, Communion, icon, forgiveness, sin, repentance,” are among those things that have to be consistently re-defined. Every conversation outside a certain circle requires this effort, and, even within that circle, things are not always easy.

Such an effort might seem exhausting. The only position of relaxation within the culture is the effortless agreement with what the prevailing permutations tell us on any given day. Human instinct tends towards the effortless life – and the secular mentality constantly reassures us that only the effortless life is normal. Indeed, “normal, ordinary, common,” and such terms, are all words invented by modernity as a self-description. Such concepts are utterly absent from the world of Scripture. Oddly, no one lived a “normal” life until relatively recently.

That which is “normal” is nothing of the sort. It is the purblind self-assurance that all is well when nothing is well.

God have mercy on us.