Patriarch Irenaeus of Serbia: Russian Church is One of the Strongest in the World

Source: DECR
Patriarch Irinej of Serbia (+2020) | 05 February 2019
His Holiness Patriarch Irenaeus of Serbia was one of the guests who came to Moscow for the celebrations marking the 10th anniversary of the enthronement of His Holiness Patriarch Kirill of Moscow and All Russia. He spoke on the reasons for his coming, his vision of how the situation will be developing in Ukraine and the fate of the world Orthodoxy in an exclusive interview to The Russian Newspaper 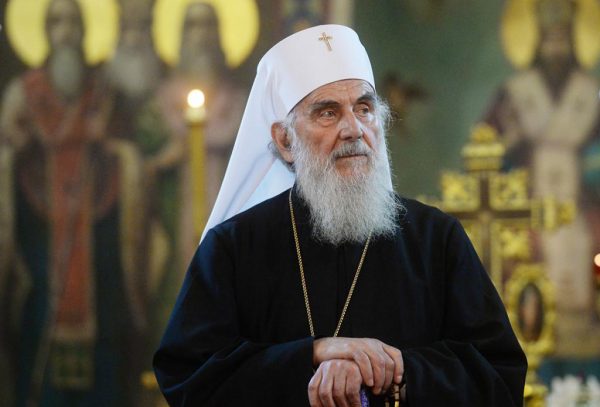 –    Your Holiness, how do these last ten years of the Russian Orthodox history look like from Serbia? What do the Serbs find interesting in the figure of Patriarch Kirill?

–  We have come to Moscow together with several fellow hierarchs from the Serbian Church to take part in the joyful celebrations marking the 10th anniversary of the enthronement of His Holiness Patriarch Kirill of Moscow and All Russia. This event is interesting not only for the Russian people and the Russian Orthodox Church but also for the entire Orthodox world. Because the Russian Church is one of the strongest among the Orthodox Churches as it plays a tremendous role in the modern world.

Both the Church and the Russian people as they are today is something amazing. The time is still fresh in our memory when, not very long ago, the Russian Church was a suffering and persecuted church. In the 20th century, she went through the severest trials in her history and gave to the Orthodox world an enormous number of martyrs for the faith. God alone knows how many were they in reality – bishops, priests, lay people who martyred for the faith.

Now, rising from so humiliated a position, the Russian Church has revived doing it for a very brief period of time. She has restored churches and monasteries, built many new churches and cloisters and, most importantly, she has revived a living Church, revived the faith in people. And in this rebirth of the Russian people, a great credit certainly belongs to this Holiness Patriarch Kirill.

We were glad to receive an invitation to this festivity from him and we thank the Lord God and His Holiness Patriarch Kirill for our participation in the celebrations and the opportunity to see all their beauty. We are also glad that representatives of other Local Orthodox Church took part in the celebrations. Our joy would have been even greater if representatives of all the Orthodox Churches had come for them. Unfortunately, not all have come, and this puzzles us and makes us think over the future of the world of Orthodoxy. Divisions and schisms are the greatest misfortunes for the Church, and today we, regrettably, are standing on the threshold of these schisms, which certainly entail serious consequences.

But let us return to Patriarch Kirill. His election to the throne is an action of divine providence and God’s grace and blessing to both the Russian Orthodox people and the world of Orthodoxy as a whole. Our time and the situation of our Orthodox Churches demand exactly such person as Patriarch Kirill. He is an image of the Primate of a Church who knows the modern world like a book and does exactly what is needed.

–  What is your prognosis on how the canonical Church and the newly created one will manage to get along? When and how will the drama of disagreement taking shape in the world of Orthodoxy be overcome? Constantinople has taken actions that the Russian Church disagrees with canonically.

–   The problem of schism in Ukraine is already a long-standing one; misunderstanding was great there, and all this has led to a confrontation within the Ukrainian people. We intended to help the Ukrainian people by convening a Pan-Orthodox Council or a conference to discuss this issue. We hoped that the Primates and delegates of the Primates of Local Churches would visit Ukraine to discuss all this with the people and, after hearing the representatives of the both sides, to try to find a way out of the situation.

Unfortunately, the events went otherwise. The Patriarchate of Constantinople came to the defences of the schismatics and wished to reconcile them somehow with the canonical Church. However, the Orthodox faithful of the canonical Church remained on their stand preserving the sacred canons. So, the Ecumenical Patriarchate managed ‘to reconcile’ only two schismatic groups by legalizing them and thus aggravating and deepening the existing division even stronger.

Recently I have met in Salonika with the Ecumenical Patriarch, and he told me during our talk what he expected. In his vision, if not the whole then almost the whole Ukrainian Church will reconcile with the schismatics and join the new “Orthodox Church of Ukraine”. Though it was clear from the beginning what exactly all these schismatics groups in Ukraine represent and that you will get nowhere with them…

It is not clear what will result from the granting of this tomos, but the longed-for peace has not come. It is difficult to foresee what pace and path will the events in Ukraine take. But it is already evident that the state is threatening to confiscate the monastery lands and monasteries themselves from the canonical Church and to encroach on the shrines. So far, unfortunately, it is very difficult to foresee what will happen next.

–  What is the situation of the Serbian Church? Does the authorities recon with it, do the people love it?

–  We live at a very difficult and hard time. We are consoled only by the fact that the Serbian youth, most of them, come to our Church, confess the Orthodox faith, living up traditions and Orthodox customs of the Serbian people linked primarily with the faith. Almost all baptize their children, except for a small number of heretics and atheists.

Each year, the number of people who come to church on Sundays, especially on great holidays, is growing. We have a real need for building new churches. A great number of people take Holy Communion on a regular basis. Many honour the Slava, the commemoration day of the heavenly patron of their family.

The state has helped the Church by solving the problem of provision of pensions and healthcare for the clergy. The religious instruction is given in all the preliminary and secondary schools. It is attended by 65 percent of all the schoolchildren. For children whose parents are against the religious instruction, the Civic Education is taught.

In the Serbian Ministry of Education, they are thinking over a change in the law so that the religious instruction lessons, on one hand, could be attended by all the schoolchildren and, on the other, this subject could be supplemented with necessary additions from the general ethical education, lessons on philosophy and building the civil environment.

We have good relations with the authorities, and when problems arise, we quickly solve them, taking into account the interests of the Serbian Orthodox Church. We do not pay attention to isolated cases when the authorities are against the Church. It is a normal way.

Patriarch Irinej: Without True Peace with God It is Impossible to Have Peace with Our Brothers

By the Grace of God Orthodox Archbishop of Pec, Metropolitan of Belgrade Karlovci and Serbian Patriarch, with all…

Theology as a Hope for the Future of the Church

Your Eminences, Most Blessed President of the Board of Trustees, Very Reverend Dean, Esteemed Professors, Dear Students, Ladies…