Patriarch Irinej at Mlaka: Serbs Must not Forget Their Victims, but They Must Forgive

Source: Serbian Orthodox Church
Natalya Mihailova | 25 April 2018
His Holiness the Serbian Patriarch Irinej said at village of Mlaka, near Jasenovac, on April 22, 2018, that the Serbian people should not forget their victims, among whom more than 20.000 killed children at Mlaka and within the Ustasha system of the Jasenovac camp, but that the Christian people must forgive. 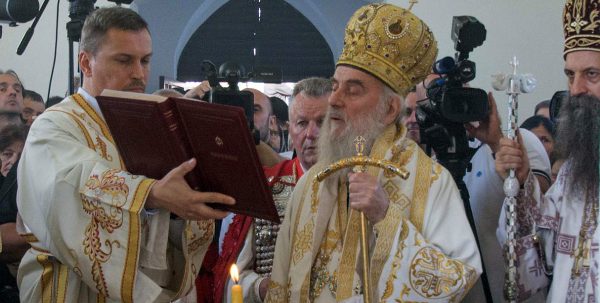 – The most innocent ones were killed here – children. This is a holy land, soaked with the blood of the Holy Martyrs of Jasenovac, said Patriarch Irinej after having  consecrated the restored church of the Holy Prophet Elijah at Mlaka and after having officiated the Divine hierarchal Liturgy. The Patriarch emphasized that it was important for the Serbian people to have a church at Mlaka resurrected.

– For that reason, the Serbs from this region should return to this holy land, to their centuries-old homes, added Patriarch Irinej, and reminded that it was in the 20th century, during the period of science and progress, that Serbs, Jews, Roma and anti-fascists from other peoples were killed, and that children and women were killed at the most cruel way. – Some members of the Tesla family were killed as well.

The Patriarch emphasized that God would judge those who had committed such atrocities.

His Holiness was concelebrated by Metropolitans Amfilohije of Montenegro-Littoral and Porfirije of Zagreb-Ljubljana as well as by Bishops Jovan of Slavonia, Sergije of Bihac-Petrovac and Bishop emeritus Atanasije.

The memorial Liturgy was officiated on the occasion of 73th anniversary of the breakdown of Jasenovac concentration camps and the consecration of the church of the Holy Prophet Elijah at Mlaka, in the Jasenovac municipality.

The reconstruction of the church of the Holy Prophet Elijah at Mlaka was initiated by the Secretariat of the Government of  Republika Srpska for religious affairs.

The village of Mlaka was during the Second World War a collection center of the Jasenovac concentration camp for women and children brought from the Kozara hilly area. More than thirty children died out of hunger, heat and contagious diseases daily. In the village of Mlaka, 12 kilometers away from Jasenovac, about 1.500 inhabitants lived before the Second World War. The entire population, including 250 children, were taken to the concentration camps in the spring of 1942.

Most viewed articles
Seven Lessons for the New Year from St. Seraphim of Sarov198
The Perfectionist120
New Jersey Governor Signs Bill Legalizing Abortion Up To Moment of Birth83
140th anniversary of repose of St Antipas the Athonite of Calapodești celebrated in Roman56
Metropolitan Hilarion Celebrates the 20th Anniversary of His Episcopal Consecration47
The Way of Christ Is The Way of Love47
Most popular authors
Priest Luke A. Veronis198
Protopresbyter Themistoklis Mourtzanos120
Ryan Foley83
Aurelian Iftimiu56
Pravmir.com team47
Fr. Theodore Stylianopoulos47