Patriarch John X: Athos is a prayer-rope for the entire world

Source: Notes on Arab Orthodoxy
Patriarch John X's Speech on Mount Athos.
Patriarch John X of Antioch and All The East | 04 November 2014
"At night when human voices, movements and tumult are clothed in stillness, enlighten every movement of my soul with Yourself, O Jesus, Light of the Righteous. At the hour when you give rest to the weary, O my Lord, let our thoughts of you be intoxicated with the sweetest dream, O sweetness of the saints. At the time of going to sleep, when the drunk repose through temporary artifice, awaken in us, O Lord, that eternal knowledge. At the start of the day, when all are concerned with earthly things, make us worthy, O our Lord, to enjoy following the heavenly path. At the hour when all remove their nightclothes, remove from our heart, O Lord, remembrance of the world that is passing. At daybreak when sailors set out upon the sea of this world, give rest, my Lord, to souls in your haven. In your mysteries, we embrace you every day and receive you in our body. Make us worthy to feel in our souls the hope that we have in the resurrection. Be, O Lord, wings for our mind, so that it will fly in the gentle breeze until by these wings we reach our true nest." 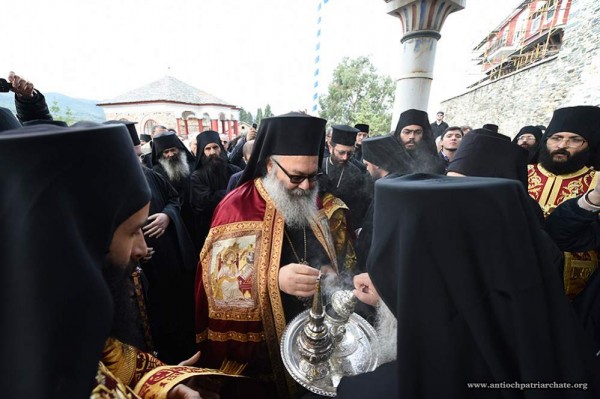 I could not have found more beautiful words than these by Saint Isaac the Syrian with which to begin my speech here. I have found none better than them, a sincere prayer that encapsulates the spiritual experience of Athos and describes the state of the human soul caught up in divine love.

These words of Isaac the Syrian, are embodied by people I have known and among whom I have lived, unworthily, as a monk on Athos.

Athos embodies the experience of the Church praying and worshiping before the cross of her Lord, in constant prayer for the entire world.

Athos is incense of supplication before the Sacrificial Lamb for the salvation of the world.

Athos is a candle of prayer before the Virgin’s purity, nourished with the oil of obedience and non-acquisitiveness and the wick of virginity. From its well the flame of holiness extends and its light shines out to the world.

This Athos is the safe harbor of the Virgin in the bottomless sea of this world. The mighty waves of time break before one who is moored with the Virgin.

It is a pleasure to me to send greetings to my brother His All-Holiness Bartholomew, Archbishop of Constantinople – New Rome and Ecumenical Patriarch from this church, and to light a candle of prayer for him on my behalf and on the behalf of the delegation accompanying me, as he watches over this monastic republic.

I came to know it as a school of theology, where all theories melt away in the reality of life. In these monasteries, theology is kneaded with the life of prayer. Here, as in many places, theological knowledge is mixed with piety and all these things come together at the glorious living liturgy.

The mountain is a prayer-rope for the entire world. At the same time, it is an oasis from which Orthodoxy throughout the world drinks. I drank from it myself personally and learned here and in the Athonite Monastery of Saint Paul that this mountain with its monasteries, sketes and cells is the place where the dough of theology is kneaded with prayer. I learned that the theologian is the one who prays and loves. He does not disdain the knowledge that he acquires in school and he does not disdain the piety and prayer that he sees in monasteries. Rather, he arrives at both in the symphony of his life in order to become a being who hymns God Most High, in every resting-place of the Spirit over the course of his life.

In our modern era, the Holy Mountain has had an enormous impact on the Patriarchate of Antioch.

In Antioch today, there are people who have lived and fallen asleep here.

In Antioch today, there are patriarchs, bishops and priests who have passed through and learned from the monks in the Garden of the Virgin.

In Antioch today, there are brotherhoods and monasteries whose founders have drunk heavily of the well of Athonite Orthodox monasticism and have spread life into the stones of her monasteries.

In the 1970s, Father Isaac Atallah came here. He came to you bearing the suffering of Lebanon, which was reeling under the impact of a war that had expelled its children.

Today I come to you asking for your prayers for Syria and for all the Middle East which are being tossed about by the tumult of wars.

I come to you today asking your prayers for the cradle of Christianity, the bride of the Orthodox East, the Church of Antioch.

I come to you bearing the wounds of your family and loved ones in Syria.

I come to you from the land of Ephrem the Syrian and of the Damascenes Andrew, John, Cosmas and Peter.

I come to you from the land of Simeon the Stylite to ask you to pray for the land that was first baptized in Christ’s name.

I ask you to pray for people who have been driven from their homes and kidnapped.

I ask you to pray for the kidnapped archpastors of Aleppo and priests.

I ask your fervent prayers for Metropolitan Yuhanna Ibrahim and Metropolitan Paul Yazigi, who is known to the soil of this Holy Mountain, its cells and monasteries.

I ask you to pray for innocent people who are paying the price of cruel days, terrorism and blind takfirism. I ask for these prayers filled with firm hope that the Middle East will return to being a source of light and the homeland of the peace of the Child in the manger.

I ask your prayers for Lebanon, Lebanon which is languishing under a certain degree of unrest, including random kidnappings and a vacuum in its constitutional institutions.

We say this with the hope– indeed, the certainty– that Lord hears the prayer of the righteous.

I come bearing to you the prayers of the monks in our country and I bear to you the bells of its love.

I bear to you the love of great and small in Antioch, Antioch which is great in the faith of her children and in the power of her rootedness in her land, Antioch the great which has been smashed against the rocks of her history, the cruelty of days long past and present, Antioch which has anointed the inhabited world with the light of Christ.

It is a great blessing for the Patriarch of Antioch and the Church of Antioch to be here and to join our prayer with your prayer, my brothers, and for us to all cast ourselves before the icon of the Virgin “Axios Estin” and say:

Protect O Mother of God, O hope of the faithful,

From all the harm of this life, those who ask you with certainty

Letter of His Beatitude Patriarch JOHN X for Great Lent, 2022

Homily of His Beatitude Patriarch John X On the Eve of the New Year, Mariamiyah Cathedral in Damascus,…

Letter to the Ecumenical Patriarch from His Beatitude Patriarch JOHN X

His Beatitude John X, Patriarch of Antioch and All the East of the Orthodox Church denounced the recent…