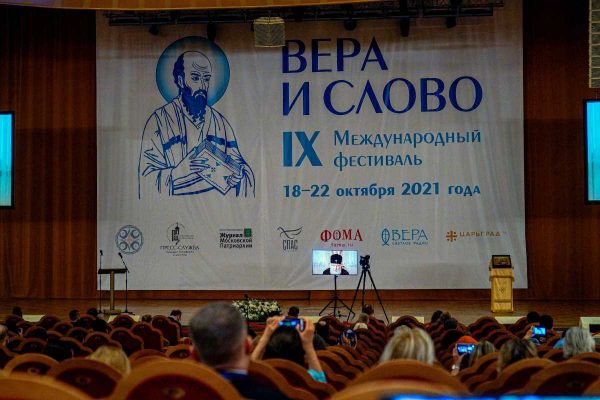 On October 21, 2021, His Holiness Kirill, Patriarch of Moscow and All Russia, had an online conversation with delegates of the 9th International Faith and Word Festival held on the theme “The Church in the Changing World: Challenges and Lessons of Digitalization”. The Primate of the Russian Church answered questions from participants in the forum.

One of the questions to His Holiness was asked by Deacon Mikhail Stepankov, head of the department for the Church’s relations with society and mass media of the Diocese of Ekaterinodar and Kuban. “At the opening of the Conference on the World Orthodoxy: Primacy and Conciliarity in the Light of the Orthodox Doctrinal Teaching”, you said that the Patriarchate of Constantinople actually follows the model of reproducing the 1054 schism. If it is really so, if it is really their aim, then what will we arrive at? What awaits us?”

“It cannot be the aim of the Patriarchate of Constantinople. Certainly, it does not seek to produce a schism; to destroy the unity of Orthodoxy is not its aim. However, the desire to assert its primacy not as the first among equals but the first without equals – as what has already been declared by Constantinople – for certain is fraught with a terrible charge, with a bacillus of destruction of the church unity”, His Holiness answered.

In precisely this sense the head of the Russian Orthodox Church keeps reminding us of what happened in 1054, “The bishop of Rome sought to extend his direct jurisdiction to the whole of the Universal Church. But look what is happening now? Today, the Patriarch of Constantinople, interpreting his primacy in a new way, states that it is primacy without equals, that it is his God-defined place, which presupposes the realization of powers with regard to all the other Local Orthodox Churches. This is precisely the same attitude that led to division in 1065!”

“Then the question arises: when exactly did this doctrine emerge in Constantinople? We do not remember such a doctrine to exist as long as 30 years ago. Moreover, if it were just a theoretical discourse, we could have disputed it at conferences. But it is not just a theoretical discourse; it is a practical action of Constantinople related primarily to Ukraine. Constantinople invaded the canonical space of another Orthodox Church, and what is more, it, as it were, authorized it by its power and subjected it to itself. Is it possible that Constantinople, in undertaking these seductive and inexplicable actions from the perspective of historical reality, did not understand that they would lead to a division?” asked the head of the Russian Orthodox Church.

According to His Holiness, to acknowledge what Constantinople has done as lawful would mean “to acknowledge the Eastern Pope”. If we remain Orthodox, we conciliarly acknowledge that in the Orthodox Church there is the first among equals and that this first one has a very limited function in no way connected with governing Local Orthodox Churches, but a purely representative function of being the first during divine services. We have even agreed that the chairman of joint Orthodox conferences should not be elected and that the Patriarch of Constantinople should be such, though initially we insisted that the chairman should be elected”, Patriarch Kirill said.

In the Russian Orthodox Church, “we have always followed the path of creating of a favourable atmosphere for pan-Orthodox dialogue”, His Holiness stressed, “This is why we have revoked our demands that the chairman should be elected; we agreed to let Constantinople be the head. But it does not mean that we have agreed that the Patriarch of Constantinople has special powers different from those that other Patriarchs have, the more so the ones that concern the whole world Orthodoxy”, the Primate concluded.