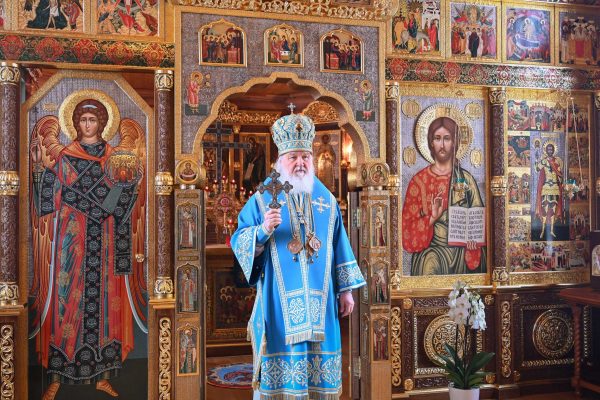 Being aware of your sins is already the greatest value, said His Holiness Kirill, Patriarch of Moscow and All Russia, in his homily after the Divine Liturgy at St. Alexander Nevsky Hermitage on February 21, Sunday of the Publican and the Pharisee, reports the official website of the Russian Orthodox Church.

“Awareness of one’s sins is already the greatest value. If a person realizes his imperfection and his sin, he is already taking steps on the path to salvation,” said the Patriarch. “That is why we read the story of the Publican [and the Pharisee] ahead of Great Lent in order to understand how important repentance is. We know how difficult it is today to keep all of the Church’s prescriptions, and I would like to support those who seek to fulfill them. But if there is no way to live strictly according to the church charter during Great Lent, then you should remember: the only way to justify yourself before God is to repeat the amazing words after the publican: “God, be merciful to me, a sinner.”

“Being fully aware of his sinfulness, the tax collector sincerely, with all his heart, asked God to forgive him, to be merciful to him. The image of a repentant sinner, a publican, who came out of the temple more justified than the Pharisee, who fulfilled the prescriptions of the religious law, should raise hope in us. If during the Holy Lent we manage to truly repent of our sins, then, perhaps, by the grace of God, we will be as justified as the publican, who, in his own opinion and, of course, in the opinion of the people around him, had no reason for justification before God. But the merciful Lord, the Heart-Seeker, saw in the words of the penitent publican such strong repentance that He made him more justified than a pious Pharisee.”

“Entering Great Lent and preparing for the days of Holy Lent, may the Lord help all of us to think first of all about repentance, about the great impact sincere repentance for our sins before God has on the human soul, without which there can be no salvation and there can be no genuine improvement of the human personality. Strange as it may sound for modern people, who are often proud, arrogant, relying on their knowledge, on their material capabilities, and who are accustomed to looking down on others, people – both great and small, rich and poor, strong and week – need to remember that true salvation, and therefore true happiness, is impossible without rethinking their life and without sincere repentance for their sins before God. Amen,” concluded His Holiness Patriarch Kirill.