Patriarch Kirill: “Christianity Has Nothing to Do with Ideology of Non-resistance” 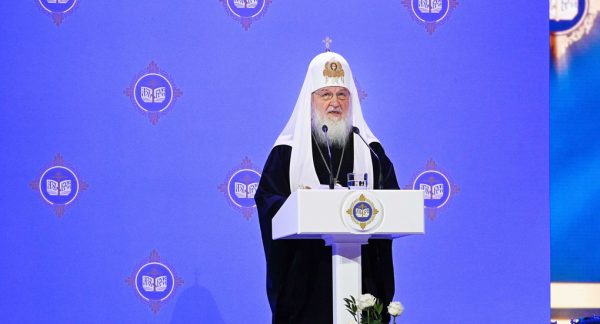 His Holiness Kirill, Patriarch of Moscow and All Russia, stressed that Christianity and the ideology of non-resistance are not the same thing. It is essential to resist evil, but in a way so that evil does not seize us, he said.

“Christianity has nothing to do with the so-called ideology of pacifism. Christ talked about the virtues of forgiveness, love for enemies and of not repaying evil with evil as one’s personal achievement and one’s inner spiritual work,” noted the Patriarch on Monday, January 27 during the plenary meeting of the XXVIII Christmas Readings.

The Primate of the Russian Orthodox Church continued, saying that meanwhile “pacifism … calls for renouncing resistance to evil at the social and state level, jeopardizing the system of social relations and principles of justice and civil accord”.

“And when people unwittingly and meekly accept evil, agree with it and bow their heads before it, it inevitably wins,” His Holiness Patriarch Kirill added.

“It is impossible to end wars in a world filled with hatred and anger. But we must resist evil so that this evil does not capture us, does not enslave our consciousness, does not blind our hearts with hatred, cruelty, and recklessness,” concluded the Patriarch.