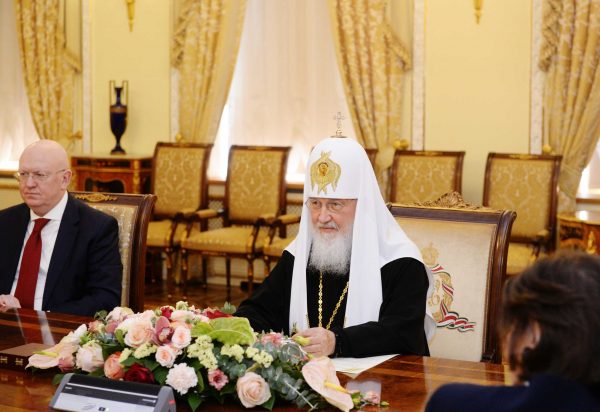 On 20 June 2018, His Holiness Patriarch Kirill of Moscow and All Russia met with Dr. António Guterres, Secretary-General of the United Nations Organization.

Attending the meeting, which took place at the Patriarchal and Synodal residence in St. Daniel’s Monastery in Moscow, were Mrs Rosemary DiCarlo, UN UnderSecretary-General for Political Affairs; Mr. Vladimir Voronkov, Under Secretary-General of the UN Counter-terrorist Office; Mr. Vasily Nebenzya, permanent representative of the Rusian Federation to the UN; Archpriest Nikolai Balashov, deputy chairman of the Moscow Patriarchate’s Department for External Church Relations (DECR), and deacon Andrei Titushkins, a staff member of the DECR Secretariat for far abroad countries. 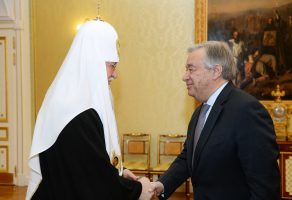 His Holiness Patriarch Kirill greeted the high guest and said that the Russian Orthodox Church respected the activities of the United Nations Organization as the main platform for the world multi-stakeholder dialogue where all countries can express their position.

“We live in a troubled time. Of our prominent concern are the expansion of terrorism all over the world and serious civil conflicts that from time to time impair the stability of stets and society. Our mind is not at rest about relationship between the rich and the poor,” His Holiness continued to say.

“People hoped that the situation would turn for the better in the 21st century, but, regrettably, with all positive changes in the modern history of humanity, there are certain problems which our contemporary society fails to resolve. Certainly, the Church has her own answer not shared by many, but it is a fundamental one: evil comes from human heart. One cannot disregard the crisis in the sphere of moral life at the present, and the participation of the Church in international affairs should be aimed at the wakening of human consciousness and bringing of people to the understanding that real progress is impossible without moral renewal.”

His Holiness noted the dire situation of Christian in various regions of the world, particularly in the Middle East, where Christians live under the threat of total annihilation, and said: “I visited Syria when the conflict has just started, and I considered it necessary to go to Damascus and Lebanon to meet with Christians and discuss the situation. Thousands of people in Damascus and Beirut met me, and I enjoyed seeing their cooperation, and I state now that different Christian confessions and Muslims lived in peace with one another.”

His Holiness expressed his concern for the fact that many Christians had left Syria. “I believe that we must do anything possible for the return of Christians to Syria, Lebanon, and Iraq from where they had been ousted by terrorist attacks,” he added.

“The Russian Orthodox Church, together with other Christian communities, advocates the persecuted Christian minorities. I state that the Orthodox, Catholics and Protestants are aware of the necessity to do the utmost for putting an end to the disappearance of Christians from the Middle East,” Patriarch Kirill underscored.

“We implement the programme of aid to those who had suffered in Syria and in other countries of the Middle East and try to cooperate with our Catholic and Protestant brothers and with the Muslim community,” His Holiness said and noted the high level of dialogue between the Russian Orthodox Church and representatives of other religions.

Also discussed at the meeting was the problem of family values in modern society.

His Holiness believes that the “upholding of morals and ethics is the pledge of peace on our planet. Therefore we consider our participation in discussing international problems necessary.”

The UN Secretary-General thanked the Primate of the Russian Orthodox Church for an opportunity to meet and discuss topical issues of international life at present.

He said that the role of religion was very important for confidence-building among countries and also expressed his concern for the situation of Christians in the Middle East. He added that Christian communities were an integral part of the identity of the region, and it will be necessary to help Christians and all religious minorities to return after the situation in Iraq and Lebanon is stabilized and a diplomatic solution is found.