Patriarch Kirill: “External Difficulties are No Reason for a Priest to Leave His Ministry”

Source: Pravmir.ru
Patriarch Kirill of Moscow and All Russia | 26 September 2014
During a meeting with participants of the Sixth International Orthodox Mass Media festival themed “Faith and Word,” His Holiness, Patriarch Kirill, was asked how people should treat the few clergymen who have left their ministry in the Southeast Ukraine due to military actions and not judge them. What should a priest do if he gets into such a situation? His reply was as follows: 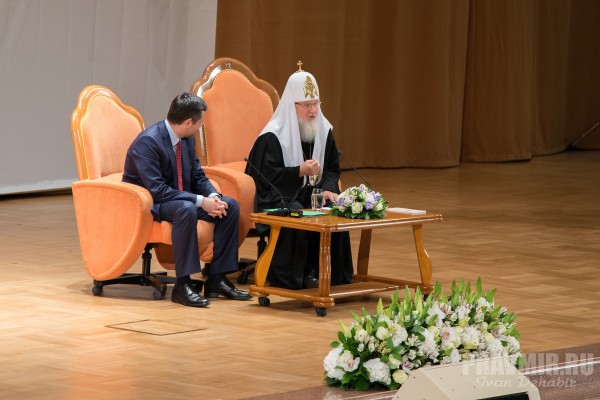 “I believe that everyone should follow his conscience. But sometimes even our conscience, like a frail vase, can be affected by corrosion and deformity. I’m absolutely positive that we should follow the example of the Very Reverend Mitrophan, Archbishop of Horlivka and Sloviansk, and all those clerics who serve in the East of Ukraine at the present time. They stay with their people and often they suffer for it. We are aware of victims among clergymen. We know of those who have been tortured and harshly interrogated. We are aware of churches and monasteries that have been destroyed during bombings. Of course, staying with one’s people is a heroic feat in such conditions.

“God will judge those who have left. I do not know the consequences and that’s why I personally cannot condemn anyone right now. God knows what the reasons were. However, if we look at this situation as a matter of priestly calling, it is unnatural, because external difficulties are no excuse for leaving one’s ministry. ‘Be thou an example of the believers, in word, in conversation, in charity, in spirit, in faith,’ the Apostle Paul said in his Epistle. Being the right image means exposing this image in one’s position. I do not believe that it is the right image when a priest’s family leaves the place where the priest serves just to save themselves.

“However, I would like to point out that I cannot be a judge, not knowing all the consequences. But this is an enormous challenge to those who wish to become a priest. Those who would like to be a priest and those who are already priests should never associate their lives with comfortable and financially well-situated ways of life. This is a completely wrong approach to choosing one’s life journey. I belong to the generation of those who were born right after World War II and who went through Khrushchev’s harshest persecution. When members of my generation decided to become priests, there was no chance of associating that life journey with a financially well-situated and quiet life. That is because everyone who chose this life faced being treated as a social outcast. They became second-rate (or worse) people in society. Their financial security could not be sufficient, because there was a special tax for clergymen and they had to give 51% of their salary to the government due to the fact they were priests alone. Perhaps few people know this.

“I was born to a family of a priest myself, and my childhood was spent in poverty. When I decided to become a priest, I realized that I would never be rich or hold an honorable position in society. The fact that the situation has changed was a pleasant surprise. However, we prepared ourselves for a different situation. All boys who applied to a seminary were preparing themselves for other things, including the worst and the most dangerous things, especially following Khrushchev’s persecution. We could again be put through this atmosphere, including oppression, which existed in the twenties, thirties, at the end of the fifties, and the beginning of the sixties.

“Therefore, I strongly believe that everyone should tell themselves that they are going to be happy before ordination to the priesthood. It should be the same for both a financially well-situated and destitute life, both for peaceful times and times of war. They will be happy not because they will or will not hold a noticeable position in society, but because they will serve the Lord. And this is their calling. And may God grant it to us, so that this is how the clergy of the Russian Orthodox Church be formed, basing themselves on this approach to life and not on any other.”