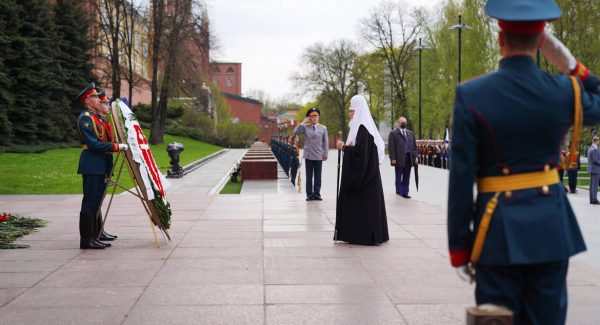 On May 8, 2022, on the eve of the 77th anniversary of the Victory in the Great Patriotic War, His Holiness Patriarch Kirill of Moscow and All Russia laid a wreath at the tomb of the Unknown Soldier in the Alexander Garden near the Kremlin, honoring the memory of those who died in the war.

After the laying of the wreath, a moment of silence was observed. Then the Primate, the hierarchs and clergy of the Russian Orthodox Church sang “Eternal Memory” to “leaders and warriors who laid down their lives for the faith and the Fatherland” and sang the troparion of Pascha.

As His Holiness noted in his speech, the victory in the Great Patriotic War was achieved by “incredible efforts, a huge concentration of will and faith in victory, and the courage of our people.”

In addition, as Patriarch Kirill recalled, the Victory Day fell on the celebration of Pascha and the commemoration day of St. George the Victory-Bearer in 1945.

“Through this combination of circumstances – the practical end of hostilities, the celebration of Pascha and the celebration of the memory of St. George the Victory-Bearer – a signal was given to our people from above, so that we would always combine faith, loyalty and strength. The faith in God, loyalty to the Fatherland and strength capable of defending the country,” added the Patriarch.

Addressing the clergy, His Holiness Patriarch Kirill emphasized that the Church “always helped our Fatherland to win the victory through its prayer, in a word, and spiritual edification.”

And today, His Holiness Patriarch Kirill concluded, the clergy are called upon to protect the people on the spiritual front – “to educate them in the faith, in love for the Fatherland, and in the ability to resist all standards of life, behavior patterns and philosophical ideas imposed upon us, which are alien to the Orthodox faith and historical traditions of our people.”