Patriarch Kirill: It was a Talk of Primates Aware of their Responsibility for the state of Universal Orthodoxy 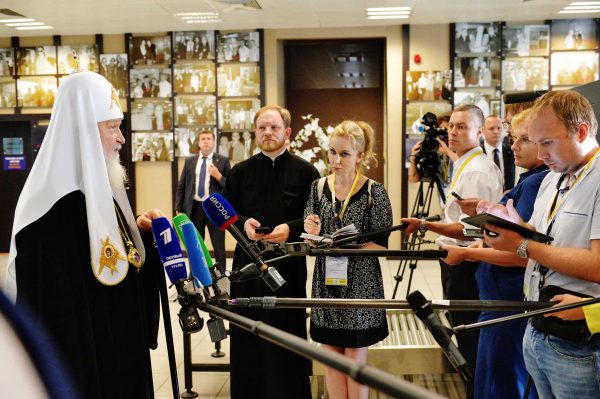 Participating in the meeting were Metropolitan Hilarion of Volokolamsk, head of the Moscow Patriarchate department for external church relations (DECR), Archpriest Nikolay Balashov, DECR vice-chairman, and members of the Synod of the Patriarchate of Constantinople.

Before the departure for Moscow from the Istanbul airport, Patriarch Kirill answered questions from journalists.

According to His Holiness, for the past two years since the previous meeting of the two Primates, ‘much has happened in the life of our Church, and the whole situation in the world has greatly changed’.

Having described the dialogue that took place between them as ‘a talk between two brothers’, Patriarch Kirill stated that they discussed ‘all the problems on the agenda’.

‘I hope we will continue working together so that the world may become better’, he added.

‘Without coordination with His Holiness, I would not like to let you into details, although there was nothing secret, nothing that would make one’s consciousness explode’, Patriarch Kirill specified, ‘It was a very proper talk – a talk between the heads of two Churches who are aware of their responsibility of the state of Universal Orthodoxy and for the state of human souls in places and countries under our responsibility’.

Speaking about a continuation of pan-Orthodox dialogue, His Holiness underscored that ‘problems keep emerging, challenging Churches from the pastoral point of view. The world is changing rapidly, and no Church can make decisions that would run contrary to the position of another Orthodox Church’.

‘Therefore, we are simply programmed for interaction and cooperation, and since the world is rapidly changing, this cooperation, too, should be dynamic enough’, His Holiness concluded.